Poor planni­ng and neglig­ence have led to the govern­ment incurr­ing losses of millio­ns
By Ahtisham Khan
Published: April 1, 2019
Tweet Email 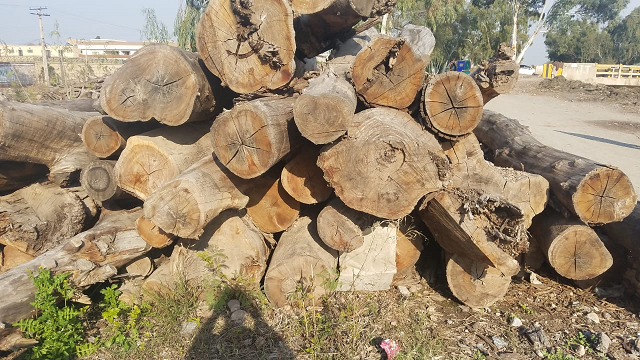 Poor planning and negligence have led to the government incurring losses of millions. PHOTO: EXPRESS

PESHAWAR: The billion tree tsunami took a backseat to infrastructure development, as 25,000 saplings planted from Chamkani to Hayatabad and numerous precious fully-grown trees have been felled to make way for the Khyber-Pakhtunkhwa government’s flagship project.

Along the 27-kilometre route from Chamkani to Hayatabad, not only has the infrastructure in Hayatabad, University Road, Saddar, Gulbahar, and Chamkani been destroyed, but the millions invested in placing green belts in these areas have also been wasted due to the Bus Rapid Transit (BRT) project. Poor planning and negligence have led to the government incurring losses of millions.

Documents available with The Express Tribune show that before starting the BRT project, the government had begun work on the Clean and Green Pakistan project in which saplings were planted from Chamkani to Pir Zakori flyover at a cost of Rs96 million, Rs19 million were invested on renovation and planting saplings along Gulbahar flyover, while Rs38 million was spent on beautification and plantation on the green belt from Ring Road to Charsaddah Road flyover, Rs29 million on beautification of parks, and from Jamrod Road to GT Road, planting seasonal saplings cost the taxpayer Rs2.73 million.

Similarly, according to the documents, Peshawar Development Authority (PDA) spent millions on beautification, which involved planting saplings in dozens of areas and installing LED streetlights, while millions were spent to widen footpaths and carve out sewerage lines. 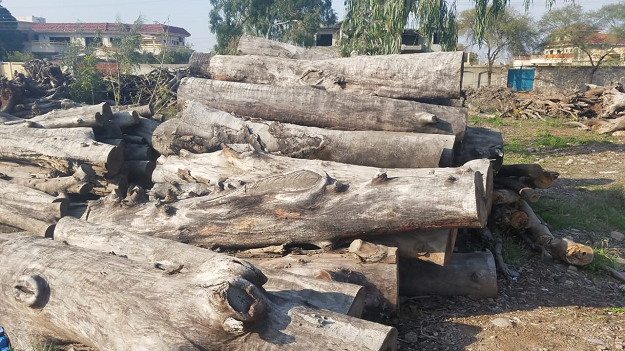 The big question remains that why the government invested in such short-sighted beautification projects after it had already green-lighted the BRT project in 2017, under which these areas would all have to be cleared and reworked.

Former provincial minister and JUI leader Maulana Amanullah Hifazati, who challenged the BRT project in the Peshawar High Court over its environmental aspects, told The Express Tribune that as per the Asian Development Bank report, “the BRT project survey was done in 2014, so why did the government spent millions on the Clean and Green project and beautification of Peshawar project?”

“In the very next year (2017), work on the BRT project started and the Clean and Green Project was ravaged,” he added, while estimating that nearly 25,000 plants and trees were removed due to the BRT project from areas including University Road, Islamia College, Hayatabad, Jamrud Road, GT Road, and Gulbahar Road.

He said 7,000 plants were removed from Qila Hisar to Chamkani, 1,500 big and small plants from Bala Hisar to Gora Kabristan, while 15,000 big small trees from Gora Kabristan to Hayatabad and saplings planted just before the BRT project were also removed.

According to PDA sources, from Hayatabad, Jamrud Road, University Road, and some interchanges, just before work on the BRT began, 100-year-old old banyan trees and 200-year-old sheesham (Indian Rosewood) trees were uprooted. “These are still lying in Hayatabad’s Shalman Park, while countless other trees have been stolen by people from the park. The brutality with which these ancient trees were pulled out, Peshawar mourns the loss,” he said.

K-P Environment Minister Ishtiaq Urmar told The Express Tribune that “it is true that pollution has increased due to the BRT project, air pollution and noise has also increased.” He also admitted that trees were felled for the project, but “we will try, through the Billion Tree Tsunami project, to curb the pollution in Peshawar”.

He said that after the 18th Amendment, provinces have the right to legislate on the environment, and “for the first time we made an environmental act through which any factory or industrial unit will be charged a penalty of Rs50,00 to Rs50 million for polluting. He said that once the BRT project is up and running, the pollution situation will get much better.

Due to the increase in pollution in the wake of the BRT project, reported cases of heart and lung ailments, along with other diseases have increased in Peshawar. Numerous citizens are falling ill while traffic police personnel deployed along the BRT route seem the worst affected.

According to Peshawar Traffic SSP Kashif Zulfiqar, traffic wardens on duty around the BRT have seen increased rates of heart disease and hepatitis. “To help with their treatment, we have written to PDA and the provincial government.”

In addition, Due to the BRT project, the route from the tribal Khyber District has been cut and the construction of a station in Hayatabad has affected the flow of the Bara River. Hayatabad resident Malik Kashif said that in 2008 and 2010, the floods in K-P from Bara wreaked havoc along the same route, while adding that old sewerage lines and drains running along the route have also been affected, due to which future floods could damage the BRT station and line.

Due to BRT work in Saddar, the historically important and eye-catching Sunehri Mosque has been damaged. The mosque and its minarets, which used to be visible from most surrounding areas, is now hidden behind the BRT flyover. The approach road has also become narrower.

Peshawar’s old markets and parks have also been affected. A question mark has been placed Jinnah Park, which, during its past life as Cunningham Park, was the location where the 1947 referendum on the province’s future was decided. The vote was in favour of joining Pakistan.

The park has been cut through to accommodate the flyover.

Meanwhile, GT Road has been narrowed further, which has affected the accessibility of the historical Khyber market and other historic areas.