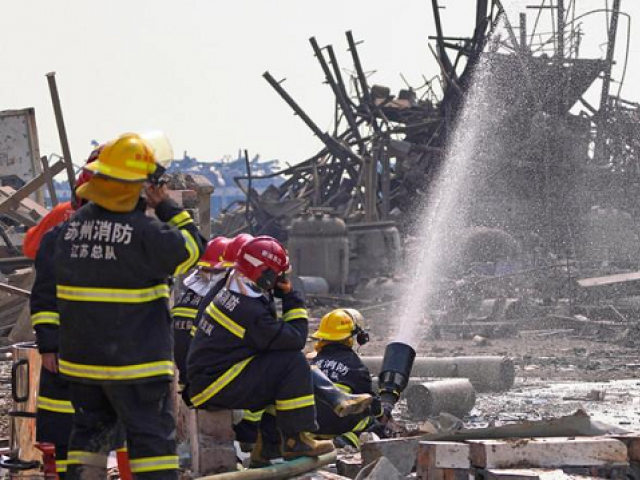 Firefighters work on the rubble of a pesticide plant following an explosion in Xiangshui county, Jiangsu province, China on March 23, 2019. PHOTO: REUTERS

BEIJING: Five workers were killed and three injured in a factory explosion caused by a gas leak in eastern China, local authorities said on Saturday.

The blast happened on Friday night at a perlite workshop in Shandong province, city officials said in a statement.

All five victims were night shift workers inside the Qingzhou city factory during the explosion. Three others outside the workshop suffered mild injuries and are still in hospital under observation.

“The cause of the accident was initially found to be a liquefied natural gas leak, and the specific cause is under further investigation,” the statement said.

A company official from the Yongli Perlite Plant has also been detained by local authorities, it added.

Perlite is a form of volcanic glass that it mined and processed, often used in horticulture, insulation and plastics production.

The incident came barely a week after one of China’s worst recent industrial accidents, in which an explosion at a chemical plant killed 78 people and injured hundreds.

The powerful explosion in the eastern city of Yancheng toppled several buildings in the industrial park, blew out windows of nearby homes and even dented metal garage doors.

It prompted the State Council, China’s cabinet, to order a nationwide inspection of chemical firms.

In November, a gas leak at a plant in the northern Chinese city of Zhangjiakou, which will host the 2022 Winter Olympics, killed 24 people and injured 21 others.

Leaked chloroethylene came in contact with a fire source causing the explosion, authorities said in a February report that revealed the Chinese chemical firm responsible for the accident had concealed information and misled investigators.

In December, three students were killed in a blast at a Beijing university laboratory during a research experiment on wastewater treatment.

Last July, a blast at a chemical plant in southwest Sichuan province left 19 dead and 12 injured. It was later revealed the company had undertaken illegal construction which did not pass safety checks.

In 2015, China saw one of its worst industrial accidents when giant chemical blasts in the northern port city of Tianjin killed at least 165 people.

The explosions caused more than $1 billion in damage and sparked widespread anger at a perceived lack of transparency over the accident’s causes and its environmental impact.