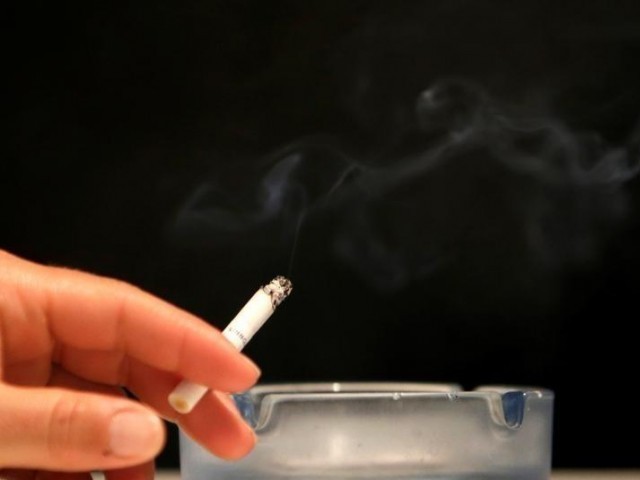 An individual smokes a cigarette in this representational image. PHOTO: REUTERS

ISLAMABAD: The chairperson of a parliamentary panel on tax revenue from the cigarette manufacturing industry has asked the government to implement the committee’s recommendations in order to enhance tax collection to Rs120 billion by the end of current fiscal year 2018-19.

With approval of the house, the Senate chairman had constituted a special committee on the decline in tax collection from the cigarette industry, headed by Senator Kalsoom Parveen, to investigate the matter and make recommendations to the Senate.

Tax collection from cigarette manufacturers had gone down by Rs33 billion after the previous Pakistan Muslim League-Nawaz (PML-N) government introduced a third tax tier in 2017.

The Senate panel, in its report submitted to the upper house of parliament, recommended the scrapping of the third tax tier in an effort to enhance revenue collection from the cigarette manufacturing industry. However, so far the government has not taken any action.

Earlier, the Auditor General of Pakistan (AGP), in its special report, had found that the cigarette industry was involved in tax evasion of Rs33 billion. It pointed out that one of the multinational companies included its popular brands in the lowest tax tier, which led to increase in its sales and 50% reduction in tax payments.

Senator Kalsoom Parveen told The Express Tribune that tax collection from the cigarette manufacturing industry had dropped to Rs74 billion following the introduction of third tier in federal excise duty.

“The special committee’s report has been sent to the Senate. It wants the tax revenue collection to increase from Rs74 billion to Rs120 billion,” she said.

“The country needs money and therefore, recommendations should be implemented immediately to take tax revenue collection to Rs120 billion before the end of current fiscal year on June 30.”

In its report, the parliamentary body recommended that the three-tier tax system for cigarettes should be scrapped and the government should revert to the two-tier system. It suggested that a gradual increase in the rate of federal excise duty should be made annually in order to comply with the World Health Organisation (WHO) rules. “It will also result in an increase in revenues of the government,” it said.

During the tenure of previous PML-N government, the Federal Board of Revenue had revised the tax mechanism for the cigarette industry without taking key stakeholders on board. The Ministry of Commerce said it was not consulted, though the Pakistan Tobacco Board fell within its domain.

The NAB is also investigating the introduction of the third tax tier, which caused revenue loss to the national exchequer. “This loss will further rise if the current tax system for the cigarette industry continues to remain in place and recommendations of the Senate panel are not implemented,” an official said.