OIC urges UN to tackle Islamophobia, declare it a form of racism

OIC urges UN to tackle Islamophobia, declare it a form of racism 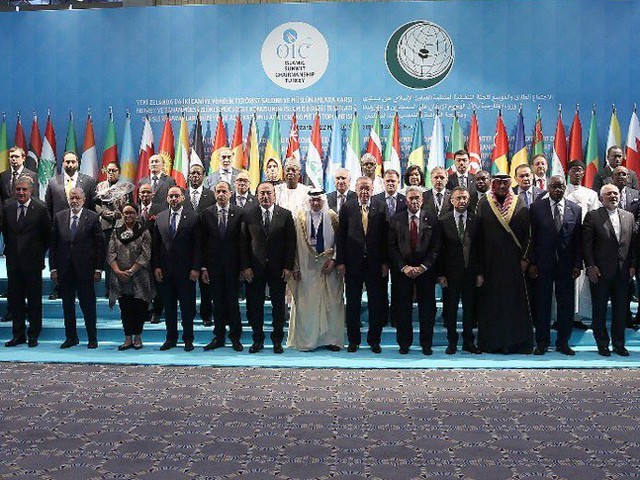 Participants of the Emergency Meeting of the OIC Executive Committee, convened in Istanbul. PHOTO: TWITTER/@OIC_OCI

The Organisation of Islamic Cooperation (OIC) on Saturday urged the UN Secretary General to convene a special session of the UN General Assembly to declare Islamophobia as a form of racism and to assign a special rapporteur for monitoring and combating the menace in the western countries.

The meeting concluded with a unanimous call that the OIC must play a proactive role in countering demonisation and denigration of Islam and Muslims and adopt a comprehensive strategy in this regard, Radio Pakistan reported.

A final communiqué, issued at the conclusion of the conference, appreciated the New Zealand government for its unequivocal condemnation of the terrorist attacks. It called upon all member states to respect the freedom of religion of all Muslims and not to deny them the right to exercise their civil and cultural rights.

Open Ended Emergency Meeting of the #OIC Executive Committee held at the level of Foreign Ministers in #Istanbul, #Turkey, on the savage terrorist attack which took lives of 51 Muslim worshippers in #Christchurch, #NewZealand: https://t.co/o7AdI867xA #OICNewZealandTerrorism pic.twitter.com/Zd0HykqWXG

All presumptions of guilt or attributions of potential crimes, extremism and terrorism to ordinary Muslims were also firmly rejected.

He lauded the valour of Naeem Rashid, who challenged the white supremacist attacker in complete disregard of his own life and aimed to saving the lives of many others, said a statement issued by the Foreign Office.

The foreign minister said that the rise in Islamophobia in the western countries and India had morphed into violent expression of this abhorrent manifestation of racism. “The international media must refrain from propagating narratives of stigmatisation of Muslims and their negative stereotyping,” he emphasised.

The foreign minister called upon the global Muslim community to douse fire with water, falsehood with truth, bigotry with understanding and intolerance with compassion.

Foreign Minister Qureshi expressed grave concerns over the use of Islamophobia and Xenophobia as vehicles for narrow political gain.