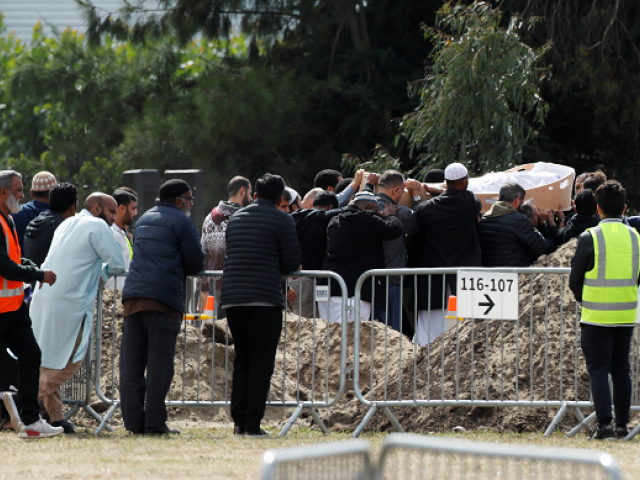 The body of a victim of the mosque attacks is carried during the burial ceremony at the Memorial Park Cemetery in Christchurch. PHOTO: REUTERS

CHRISTCHURCH: The bodies of two victims from New Zealand’s mosques mass shooting were carried in open caskets on the shoulders of mourners into a large tent at Christchurch’s Memorial Park Cemetery on Wednesday – the first burials of the 50 victims.

Wrapped in white cloth, the bodies were laid to face Mecca, and after funeral prayers, were then carried towards their freshly dug graves.

“Seeing the body lowered down, it was a very emotional time for me,” said Gulshad Ali, who had traveled from Auckland to attend the funeral.

Several mounds of dirt piled high marked the site of multiple graves which will be used for New Zealand’s worst mass shooting.

Hundreds gathered to mourn the victims.

The lion’s share of victims were migrants or refugees from countries such as Pakistan, India, Malaysia, Indonesia, Turkey, Somalia, Afghanistan and Bangladesh. The youngest was a boy of three, born in New Zealand to Somali refugee parents. 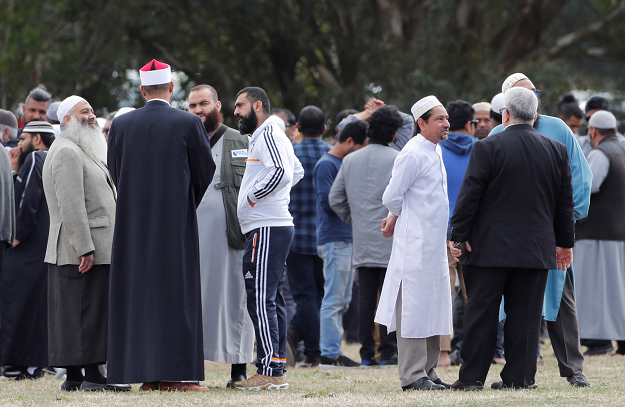 Relatives and other people arrive to attend the burial ceremony of the victims of the mosque attacks. PHOTO: REUTERS

The funeral prayer of two martyrs, Khalid Mustufa and his 14-year-old son, Hamza’s funeral prayers were offered in the presence of scores of mourners in Lanewood Memorial Park, Express News reported

The bodies of both the martyrs were brought in ambulance to the Lanewood Park. New Zealand government had made special arrangements for the families, while strict security measures were also in place.

“I cannot tell you how gutting it is…a family came here for safety and they should have been safe here,” said Prime Minister Jacinda Ardern, visiting the city for the second time since the massacre.

An area was set up for mourners to wash their hands ahead of the service, as is the tradition in Islam. Heavily armed police stood watch with flowers tucked in their revolver holsters and attached to their high powered rifles.

More burials will be conducted later on Wednesday. 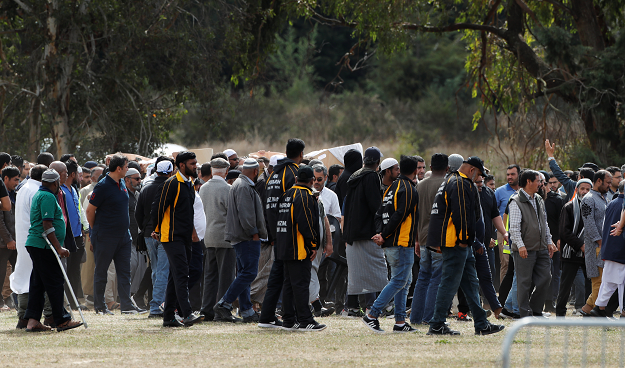 Bodies of victims of the mosque attacks are carried during the burial ceremony. PHOTO: REUTERS

Ardern said this coming Friday’s call to prayers for Muslims in New Zealand will be broadcast nationally and there will be a two minute silence on Friday.

“There is a desire to show support for the Muslim community as they return to mosques on Friday,” she said.

Australian Brenton Tarrant, 28, a suspected white supremacist who was living in Dunedin, on New Zealand’s South Island, has been charged with murder following the attack on two mosques last Friday.

He was remanded without a plea and is due back in court on April 5, when police said he was likely to face more charges. 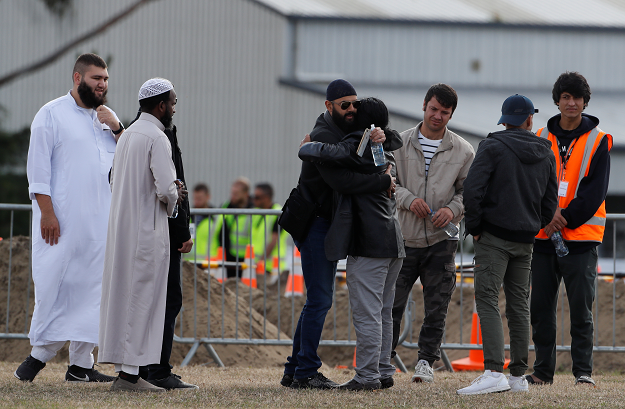 New Zealand’s police chief said global intelligence agencies, including the US Federal Bureau of Investigation and those from Australia, Canada and Britain, were building up a profile of the alleged shooter.

“I can assure you this is an absolute international investigation,” Police Commissioner Mike Bush said at a media briefing in the capital Wellington.

New Zealand Prime Minister Jacinda Ardern has said the suspect in the shooting had traveled around the world and was not a long-term resident.

As of Tuesday night 21 victims had been identified, said police and their bodies would be released for burial. Final identifications should be completed by Wednesday night. 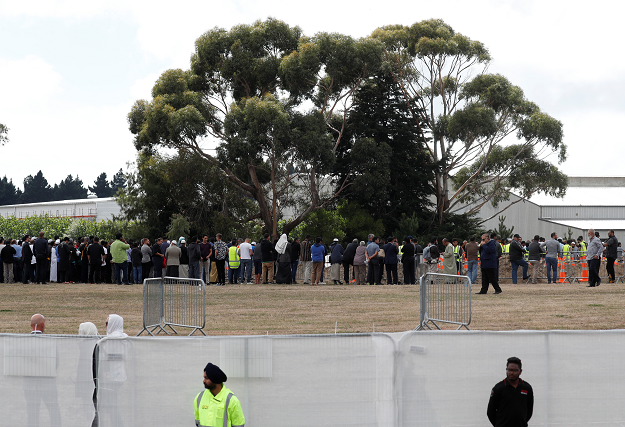 People attend the burial ceremony for the victims. PHOTO: REUTERS

Families of the victims have been frustrated by the delay as under Islam bodies are usually buried within 24 hours.

Bush said police had to prove the cause of death to the satisfaction of the coroner and the judge handling the case.

“You cannot convict for murder without that cause of death. So this is a very comprehensive process that must be completed to the highest standard,” he said. 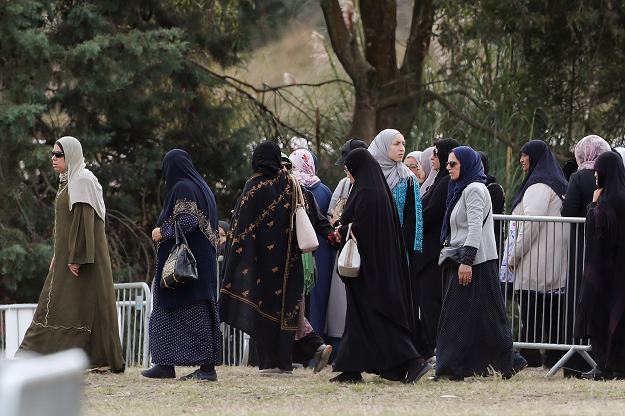 Many have had to undergo multiple surgeries due to complicated gunshot wounds. The gunman used semi-automatic AR-15 rifles, with large magazines, and a shotgun.

TRAGEDY FOR A SCHOOL

Ardern, who has promised tough new gun laws which could ban semi-automatic weapons and make buying a gun harder, has said the victims would see justice.

She has refused to mention alleged gunman Tarrant’s name, saying he does not deserve publicity.

She talked to about 200 children gathered at the school auditorium about racism and changes in gun laws.

“Never mention the perpetrator’s name … never remember him for what he did,” she said, asking the children to focus on the victims.

The students performed an emotionally-charged haka, a ceremonial war dance, for Ardern. One little girl ran up to Ardern and hugged her.

“The impact of this terror attack has been particularly cruel and tough for our school community,” the school Principal Mark Wilson said in a statement late on Tuesday.