Liverpool 'back at the top' after Bayern triumph: Klopp

I was at peace with myself without makeup and embellishments: Nayyara Noor

Being a reclusive public personality has its wonders and woes. You stay out of the limelight while people keep searching for you in the dark. As a well-known musician once said, the mystery adds to the charisma. That holds true for an artist trying to stay relevant in a fan-base that is ever-expanding yet equally disloyal, but not for a singer whose prowess has shaped the standards of our soundscape. Nayyara Noor adds the soul to our gospel and Arshad Mehmud is the guardian of her chapter.

Some people thought Noor was ill beyond a remedy, others believed she had moved abroad, but Wednesday night at Napa was a different sight altogether. Supported by her son Naad-e-Ali, she entered the venue and then the crowd took over by providing the enthusiasm she so verily deserves. Noor smiled, broke into tears but remained grateful for what she has achieved, during the short but fruitful chat with friend and colleague Mehmud. 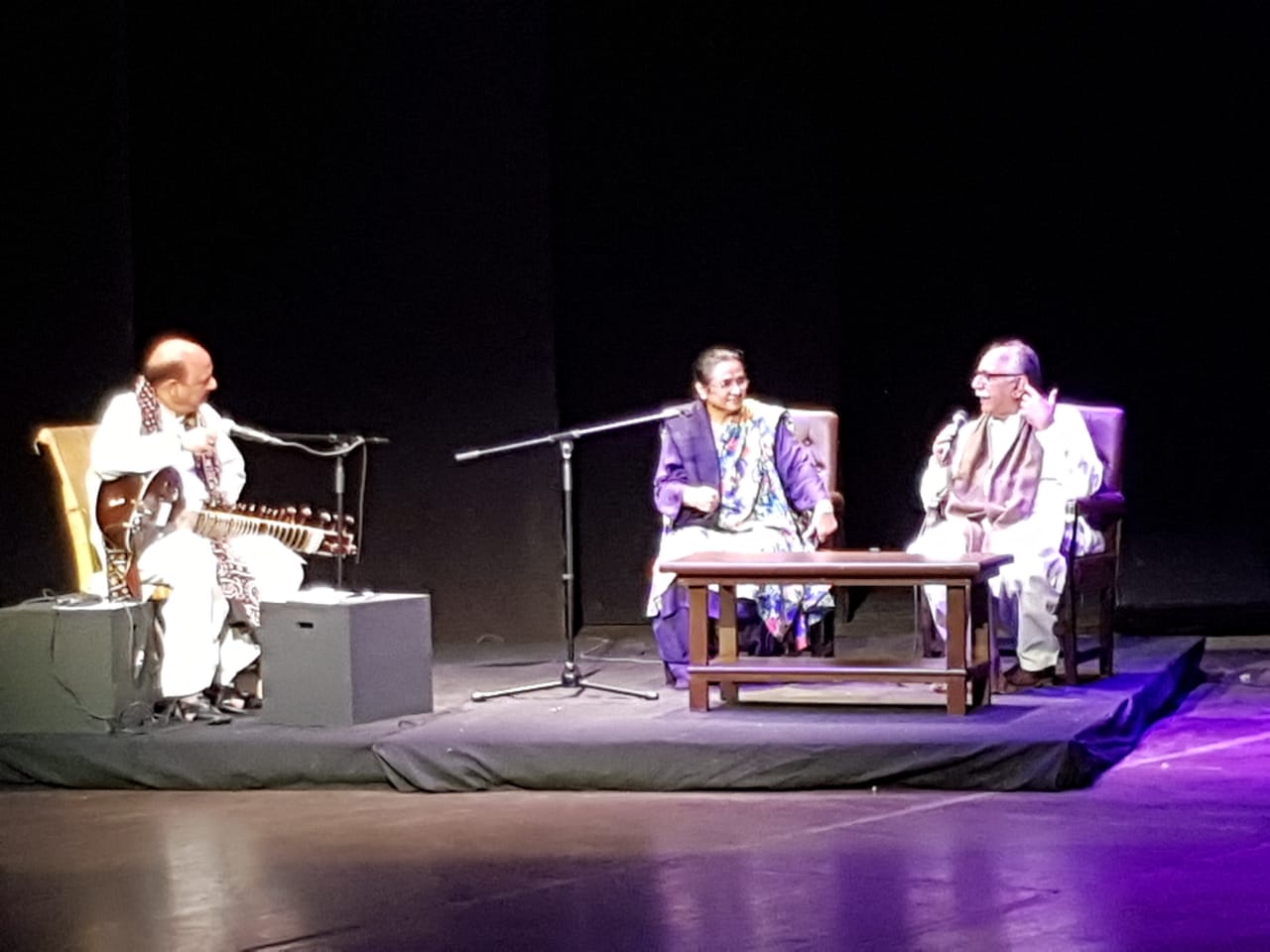 Moderator of the discussion Ustad Nafees Ahmed who also heads the music department at Napa was quick to ask why she remained so carefree in terms of presenting herself. Almost like a mendicant, you’d just do your job not bothering about the glitz and glamour that comes with the kind of fame you had, he asked.

“To be honest with you, I was never tempted by material things in life since I was a kid,” Noor replied. “I never felt shallow or incomplete without the embellishments and makeovers. I didn’t need anything to make myself look better and I was and am very content with myself,” the hall echoed with applause.

People get surprised and make fun of Noor whenever she tells them that she doesn’t remember visiting a jeweller or wearing designer clothes, “I just didn’t have that in me,” she hinted at that craving for a grander lifestyle and a star image.

“You should be in sync with who you really are and that is the only way of embracing the divine energy in you,” Noor elaborated. She was of the opinion that the more you force yourself in a certain direction the lesser chances of it to work out. “The moment you subscribe to any kind of pretentiousness or fakeness, that’s the moment you lose it.”

Mehmud shared how their creative process was similar to how Noor explained she internalises art as a part of personality and practice. “There were some basic rules to our work,” said Mehmud, “We never thought of making a hit song, we only thought about coming up with something original that does justice to what the poet is trying to say. Sincerity was key.” 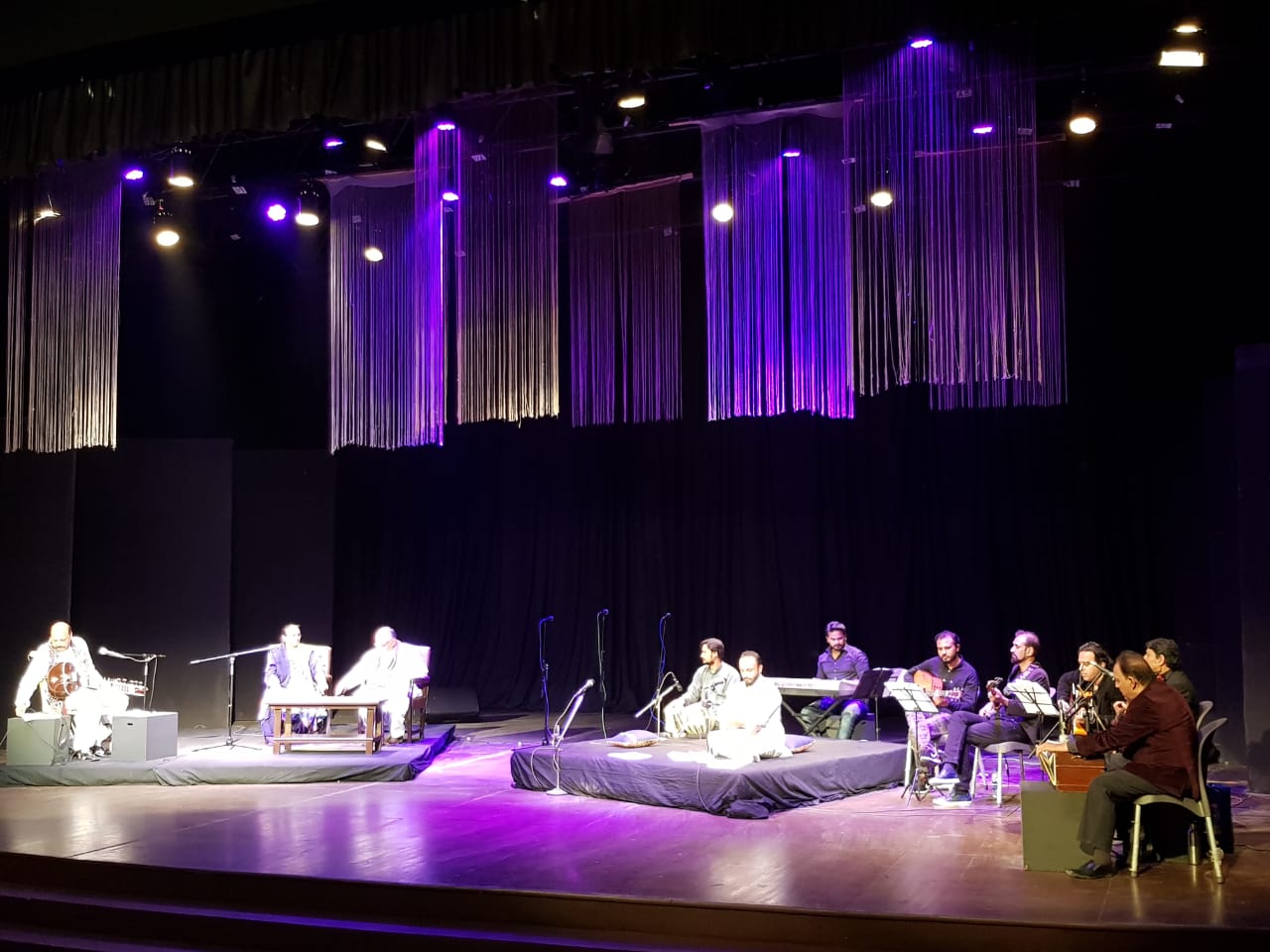 Noor remained adamant that finding yourself in your expression is the most significant part of the creative process. It’s all about avoiding that moment and the idea to dress in a stranger’s cloak. “Being who you truly are, helps tremendously,” said Noor while adding, “Only you know who you really are that is all that matters. Your essence is the purity you bring to the world and if you can connect with it then you can do wonders.”

From what I remember, we only made music because we found a deep sense of satisfaction in it, recalled Noor. “You can’t touch, taste or look at music so don’t let that purity evaporate. We didn’t just make music with sincerity, we made it with a lot of sincerity,” she exclaimed as if advising the young musicians sitting on the stage.

The evening was also filled with anecdotes from the better days. Noor remembers how her standard response to Mehmud was always, “I don’t want to sing this” and eventually the song would become a part of herself. “Part of my job was to convince Nayyara to sing and it would get tedious at times,” Mehmud quipped, “But once she sang, goodness me, I can easily say that Nayyara added sheen to everything I composed.”

Both Mehmud and more so Noor was concerned with how the purpose of music has been overtaken by its packaging. “You have flipped music as an art form. It was meant for the pleasure of your own soul and you’ve made it about everything apart from that deep sense of satisfaction. My only advise to young kids would be to watch your wings before you take off. It really isn’t about what it has become about,” concluded Noor.

Before leaving the venue earlier than expected, Noor broke into tears saying how she wasn’t doing so well but only came over because young musicians from Napa had rehearsed so hard to play her songs in front of her. “These kids have given me so much respect that I had no choice but to come here. It was difficult because of my health issues but their sincere efforts and love brought me back on stage,” she wiped her tears as her son escorted her off stage.

The session was a part of the Interntional Theatre Festival taking place at Napa until March 31.

Al Jazeera TV to refer killing of its journalist to ICC

Institutions to be held accountable for country’s destruction under ‘imported govt’: Imran Khan