Israel is not a state of all its citize­ns, Israel PM had earlie­r said in an Instag­ram post
By AFP
Published: March 13, 2019
Tweet Email 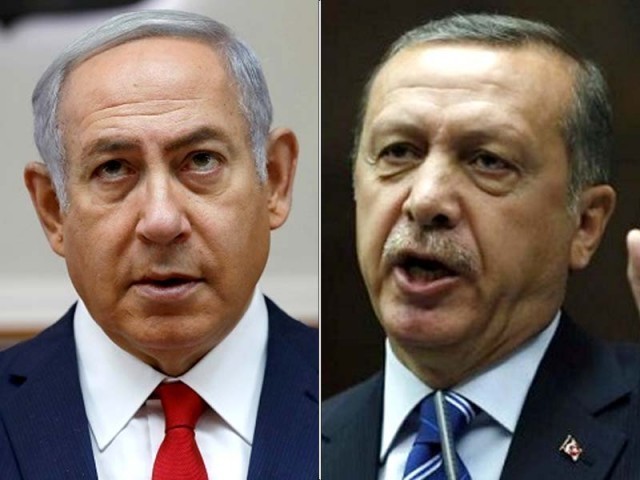 JERUSALEM: Israeli Prime Minister Benjamin Netanyahu on Wednesday slammed Turkish President Recep Tayyip Erdogan as a “dictator” and “a joke” in the latest exchange of insults between the two leaders.

Turkey on Tuesday denounced Netanyahu’s “blatant racism” after he called Israel the nation-state of “the Jewish people” only, not all its citizens.

Regev, a member of Netanyahu’s right-wing Likud party, had in a TV interview warned voters not to support its main rival because it would ally with Israeli Arab parties — a highly unlikely scenario.

Israeli model and actress Rotem Sela responded on Instagram, asking: “When the hell will someone in this government convey to the public that Israel is a state of all its citizens and that all people were created equal?”

Netanyahu reacted with his own Instagram message, telling Sela: “Israel is not a state of all its citizens.”

“According to the basic nationality law we passed, Israel is the nation-state of the Jewish people — and only it,” he said, referring to a deeply controversial piece of legislation passed last year.

Gadot, star of “Wonder Woman”, jumped to Sela’s defence.
“Love your neighbour as yourself,” Gadot wrote on Instagram late Sunday.

“This isn’t a matter of right or left. Jew or Arab. Secular or religious,” she wrote.

“It’s a matter of dialogue, of dialogue for peace and security and of our tolerance of one towards the other.”

Netanyahu says Israel ‘not a state of all its citizens’

Writing on Twitter in both Turkish and English, he said: “I strongly condemn this blatant racism and discrimination.”
Netanyahu struck back in a statement from his office early Wednesday.

“Turkey’s dictator Erdogan attacks Israel’s democracy while Turkish journalists and judges fill his prisons,” it read.
“What a joke!”

Turkey and Israel have tense relations and Erdogan, who regards himself as a champion of the Palestinian cause, is a vocal critic of Israeli policies.

The two countries in 2016 ended a six-year rift triggered by the Israeli storming of a Gaza-bound ship that left 10 Turkish activists dead and led to a downgrading of diplomatic ties.

Netanyahu has been accused by critics of demonising Israeli Arabs, who make up some 17.5 per cent of the population, in a bid to boost right-wing turnout for April polls.

He is facing a tough challenge from a centrist political alliance led by former military chief of staff Benny Gantz and ex-finance minister Yair Lapid.

After the polls, he will also face a hearing to defend himself against corruption allegations which have dogged his campaign.