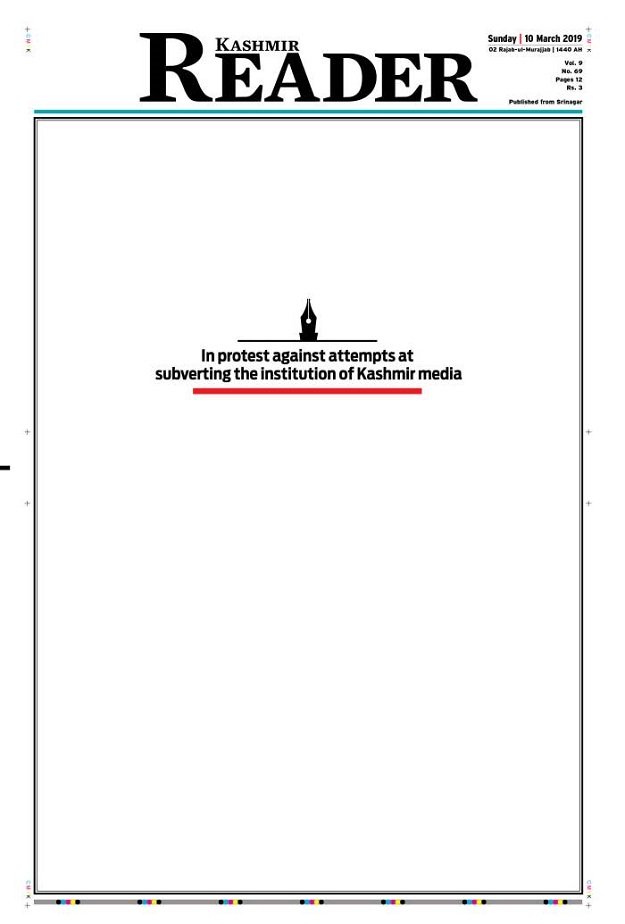 On March 10, several IoK newspapers published blank front pages with a message: ‘In protest against unexplained denial of government advertisements to Greater Kashmir and Kashmir Reader.”
Major newspapers in Indian-Occupied Kashmir published blank front pages on Sunday to protest against the Modi government's decision to stop advertisements for two leading newspapers of the disputed region, Greater Kashmir and Kashmir Reader.

According to Radio Pakistan, the main pages of several newspapers part of the Kashmir Editors Guild were published with the message: “In protest against unexplained denial of government advertisements to Greater Kashmir and Kashmir Reader.”


The two English-language newspapers, Greater Kashmir and Kashmir Reader, have been facing increasing financial difficulties since authorities began withholding all advertisements on February 16, two days after the Pulwama suicide bombing.

In an earlier statement, the Kashmir Editors Guild said the “unexplained halt directly negated the constitutional guarantees that encourage free media in democratic societies" and called out the state administration for “deliberate strangulation and subversion of the institution of media in the state”.

“We had requested the authorities to at least offer us a reason for why the advertisements were stopped, without intimation and reason. We have not been given an iota of reason, so far,” the statement said.

“The professional capacities of Kashmir media have been acknowledged world over. The Press Council of India has also issued a detailed report in 2018, detailing the issues and challenges that the Kashmir media is facing. The guild also wants to reiterate that the attempts at strangulating the media is in continuation of what has happened in last more than three decades.”

Reporters Without Borders (RSF) had also condemned the decision by Indian authorities "to endanger the financial viability of the region’s two leading English-language newspapers by depriving them of all state advertising".

The RSF said "the state government must restore state ads and treat all Kashmiri publications equally".

“No official explanation has been given for the decision ... Targeting two newspapers in this completely arbitrary manner clearly constitutes an act of crude intimidation,” said Daniel Bastard, the head of RSF’s Asia-Pacific desk.

“The authorities have no right to harass the publications they dislike with the aim of imposing their own version of the facts. Amid a surge in tension in the Kashmir valley, it absolutely vital that newspapers should be able to cover the situation in a completely independent manner, especially as press freedom is an essential condition for defusing tension.”