Sialkot – the great home of bagpipes

Sialkot – the great home of bagpipes 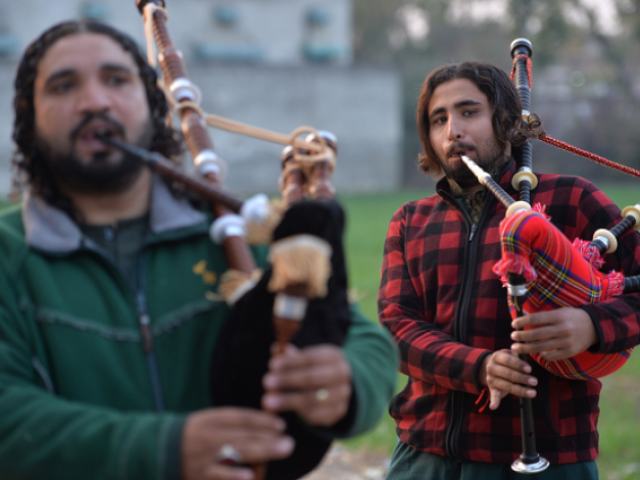 SIALKOT: Umer Farooq’s grandfather and father made bagpipes. Now he is the third generation to take up the tradition in Pakistan, which is thousands of kilometres from Scotland yet sells thousands of bagpipes each year.

The fresh smell of wood floats through the Mid-East factory in Sialkot, on the eastern side of Punjab, where Farooq is one of the managers. Workers are busy standing or sitting on the ground.

Covered in sawdust, they carve the wood and polish it. Rosewood or ebony serves as the blowstick, into which players exhale. The drones – long pipes with a lower tone – follow a similar process. 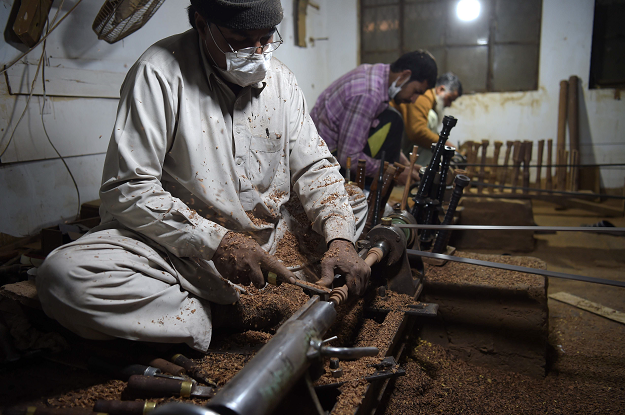 Artisans work on machines to make components to be used in bagpipes at the Mid East bagpipe factory in Sialkot. PHOTO: AFP 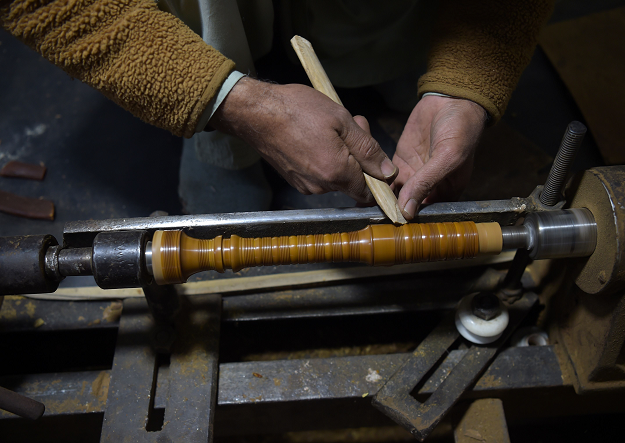 They are then attached to a bag, and often covered with tartan, a coloured plaid fabric typical of Scotland.

“In my family, all the boys know how to make a bagpipe, step-by-step,” said Farooq.

“When we were seven or eight, we would go to the factory. It was like a school, but the teachers were our dads and uncles.”

Honing such a craft is not easy. 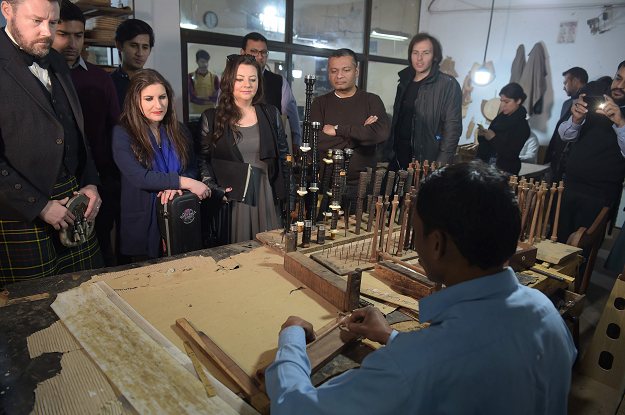 South Asia has had for centuries its pungi, a wind instrument used for snake charming, and shehnai, a traditional oboe.

But the bagpipe had to wait until the mid-19th century for British colonialists to bring it to subcontinental India.

Umer Sheikh: The kingmaker of Pakistan’s music industry passes away

“Anywhere the British army went, they took pipers with them,” says Decker Forrest, a Gaelic music teacher at the University of the Highlands and Islands in Scotland.

Locals seized on the tradition, which remains popular till this day, with dozens of bagpipe bands available for weddings and religious festivals. 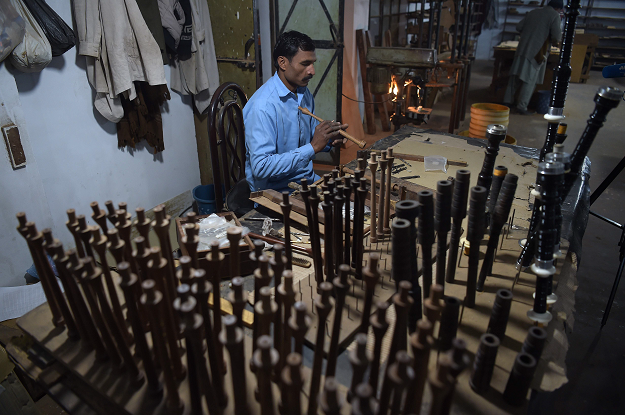 “People love the bagpipe,” smiles Yaser Sain, the leader of a Sialkot trio who play at least two performances each day, he says.

Proudly he shows pictures on his mobile phone of the band in colourful costumes.

Forrest says Pakistani bands put the emphasis on how they look, rather than musical technique, “which is less important to them”.

At the world bagpipe championship, which is held every year in Glasgow, they are “the most beautifully dressed,” he says. The kilt, however, is not de rigueur among the Pakistanis. 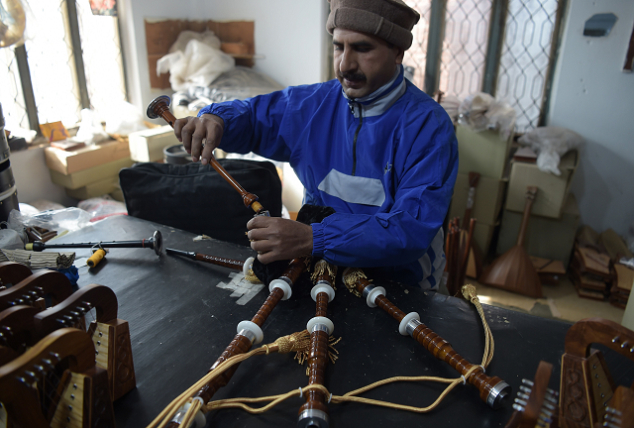 A worker fixes a component to make a set of bagpipes. PHOTO: AFP

In 2014 it established a camel-mounted bagpipe band attached to a unit of Desert Rangers. The camels, draped in scarlet and gold as their musicians sway above them, are particularly appreciated during parades.

But Pakistan’s main affiliation with bagpipes is its mass production of them, though the quality of the instruments it makes can vary.

Some 2,600 are exported from the Mid-East factory each year, mainly to the United States. 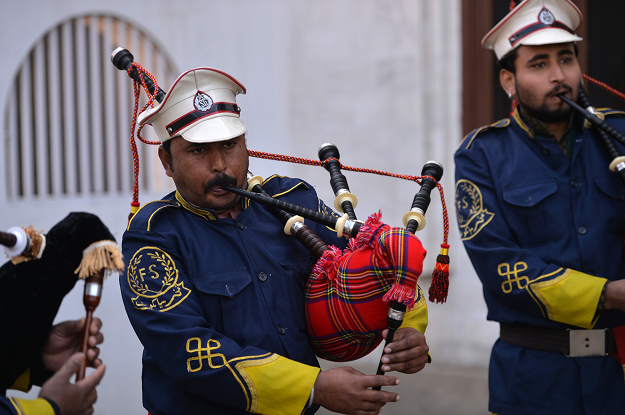 The MH Geoffrey & Co workshop, also in Sialkot, claims to manufacture a further 500 annually – but its owner, Zafar Iqbal Geoffrey, estimates that when contributions from dozens of small and medium-sized businesses in the city are counted, Sialkot can produce a total of 10,000 bagpipes a year.

That is more than any country other than the United Kingdom, according to people in Sialkot. 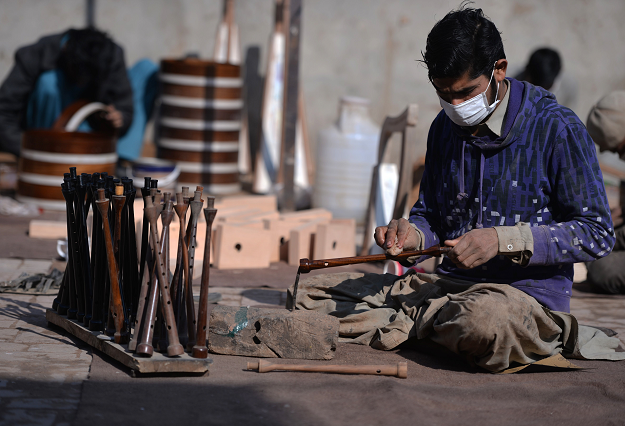 A worker polishes a component to be used to make a set of bagpipes at a factory in Sialkot. PHOTO: AFP

“Bagpipes are our roaming ambassadors. This is good not only for the economy, but for the image-building of Pakistan,” says Waqas Akram Awan, vice president of the Sialkot Chamber of Commerce.

The city’s exports for 2017 – a 15-year record of $4 million for thousands of instruments – underscores his comment.

“Our instruments are the same as the European ones, but they are much cheaper. We make music more accessible,” says Umar Farooq’s Uncle Muhammad Aftab.

Cheap labour means Pakistani bagpipes are priced less expensively than ones made in Scotland, with Mid-East’s going for around $390 in Britain, compared to $1,170 for instruments made in Scotland.

But Pakistani bagpipes have a reputation.

“The quality of sound is not the same,” says Paul Gardner, manager of a London music store.

“They are for beginners who are working on a really low budget,” he explained. “It might get somebody started, but that person will quickly look to upgrade.”