AWP member calls for de-escala­tion and an end to bloods­hed and repres­sion in Kashmi­r
By Our Correspondent / Photo: Zafar Aslam
Published: March 1, 2019
Tweet Email 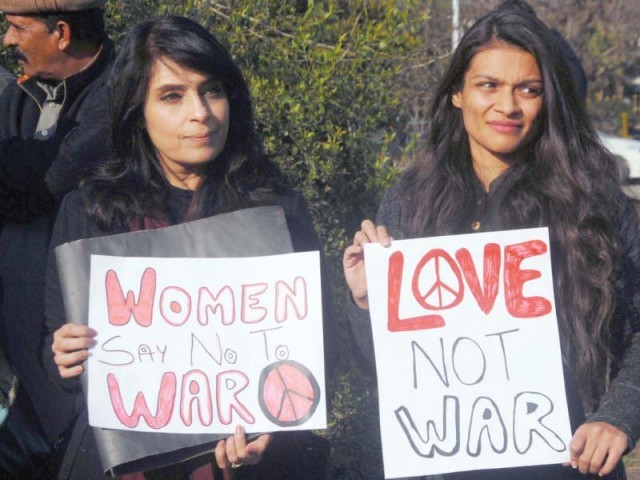 ISLAMABAD: Members of the civil society on Thursday staged a peace rally outside the National Press Club. They held up placards and banners inscribed with slogans such as “Say no to war”, “We want peace”, “War is no picnic”, “Yes to books, no to bombs.

Awami Workers Party (AWP) member Ammar Rashid who spoke at the rally said that they called for de-escalation and an end to bloodshed and repression in Kashmir.

They also lauded the peace overtures made by Prime Minister Imran Khan to India.

Meanwhile, the business community expressed their solidarity with the country’s armed forces.

They urged the Indian government to reciprocate Pakistan’s peace gestures.

ICCI Senior Vice President Rafayat Saeed and Vice President Iftikhar Anwar Sethi said that Pakistan’s desire for peace desire should not be considered as its weakness.

Similarly, Rawalpindi Chamber of Commerce President Malik Shahid Saleem said that India was suffering from war hysteria. He added that wars push sufferings from one generation to the next and that it was never a solution to any issue.

He criticised the Indian Prime Minister Narendra Modi and urged the international community and the United Nations (UN) to take notice of Indian aggression.

Students to get civil defence training