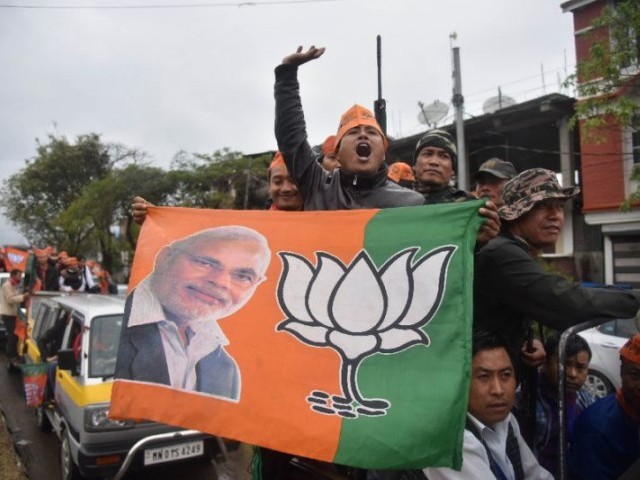 KARACHI: Mita Santra should be an Indian hero. Less than two weeks after her husband, Babla Santra, was killed in the Pulwama attack, she has emerged as one of the sanest voices in the country, reiterating that war is not the answer. But the calls for peace earned her abuse and jeers from the warmongering trolls in her own country.

Mita – and her five-year-old daughter – had more invested in ‘avenging’ Pulwama than almost any other Indian, but she was composed enough to tell Times of India why wars have no winners.

“As a teacher and a student of history, I know war can’t bring any permanent solution. A wife loses her husband, a mother loses her son, a daughter loses her father,” she said.

Many chest-thumping armchair jingoists were quick to attack Mita, even though she has already sacrificed more for India than many of them ever will. While much of the abuse she has faced is unrepeatable, one common refrain is that she did not love her husband or was unfaithful, as if her desire to save other women from feeling her pain could make her love him any less.

She could have volleyed back the vitriol, but instead, she just asked, “Sitting in their homes, some people are saying so many things, but do they have any of their family members in the army, air force, navy or paramilitary forces?”

The widowed schoolteacher then added, “People have their own opinions; its freedom of speech, and I am no different.”

Commenting on social media, rights activist Kavita Krishnan said, “In her own way she’s just as courageous as any soldier and it’s the armchair warrior trolls who are cowards.”

She also noted that in the meanwhile, “India’s PM is campaigning to his party cadres to strengthen their presence at poll booths, even as his cadres brand us unpatriotic when we #SayNoToWar. If it’s an election campaign, shut up on Pulwama and Pakistan, and answer for unemployment, Rafale, price rise, and farmers suicides.”

Meanwhile, some BJP trolls have gone as far as calling on Modi to declare Wing Commander Abhinandan Varthaman a martyr to justify a “bloody and decisive war as payback”. Indian journalist Rifat Jawaid said he was not surprised to find that the account that tweeted this is followed by Modi.

Then, speaking to reporters in Karnataka’s Chitradurga, BJP’s former Karnataka chief minister BS Yeddyurappa said the air strikes by the Indian Air Force will help his party win 22 out of 28 parliamentary seats in the state in this year’s Lok Sabha polls.

“Day by day the wind is increasingly blowing in favour of BJP. Yesterday’s action…in Pakistan has resulted in a pro-Modi wave in the country, the results of which can be seen in coming Lok Sabha polls,” Yeddyurappa was quoted as saying by Press Trust of India.

It has gotten to the point that the leaders of 21 opposition parties on Wednesday accused the BJP of “blatant politicisation of the sacrifices of the armed forces”.

“National security must transcend narrow political considerations,” they said in a statement, while separately noting that Modi was delivering political speeches and campaigning when the country was on the brink of war.

At the same time, channels such as Republic, owned by a BJP legislator, are spinning themselves silly trying to make Modi appear heroic, publishing shameless headlines such as “TITANIC WIN FOR INDIA: Pakistan to release IAF’s Wing Commander Abhinandan tomorrow, crumbling under unprecedented pressure from India.”

While doves across the border have been calling out such rhetoric from far-right media outlets, the fact remains that, at least momentarily, even the more reputable outlets went into a moment of madness, with NDTV and other major news outlets parroting India’s claim of 300-plus killed in Balakot based on sources, thus becoming pawns in the BJP’s disinformation campaign.

Former Dawn editor Abbas Nasir had recently commented, “These (Indian journalists) were nice people with their hearts in the right place but have been beaten black and blue by the Hindutva mobs. Now they submit unquestioningly to jingoism.”

On the political front, some of the madness has been confronted by sanity. Shama Mohamed of the Indian National Congress noted, “While BJP politicians are busy counting seats, the rest of India will be counting the minutes till our hero comes back home.” But criticism from within the ruling party, perhaps unsurprisingly, has been hard to find. True patriotism has taken a back seat to politics.

The few leaders who knew what was going on the whole time have been incessantly harassed by the BJP’s troll army.

Two years ago, former Uttar Pradesh chief minister Mayawati predicted that Modi would trigger a war with Pakistan to cover up his failures. She appears to have been right.

Modi thought he could use a fake war to get all of India behind him. But instead, in the words of Delhi Chief Minister Arvind Kejriwal, “What Pakistan couldn’t do in 70 years, the BJP has done in five – divide India.