Seriou­sly though, when are we gettin­g the traile­r?
By Entertainment Desk
Published: February 25, 2019
Tweet Email 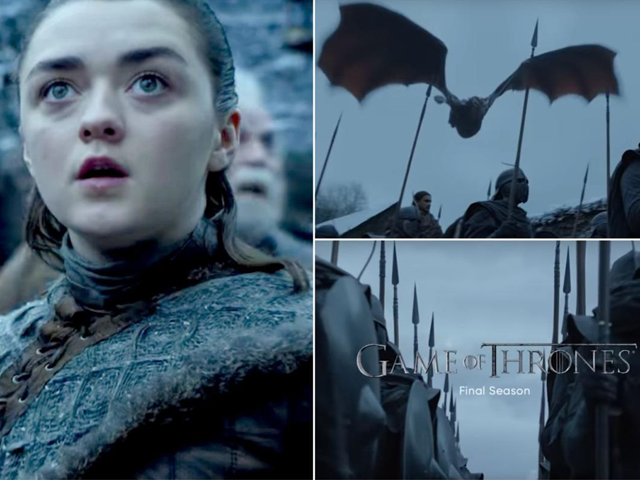 In HBO’s latest promotional video for their upcoming 2019 releases, the network included unseen footage from some of its most anticipated series, including Game of Thrones and Deadwood.

The highlight reel starts with a birds-eye shot from atop the Wall in Game of Thrones, which separates the living from the dead. As the roster of upcoming projects is revealed, one of Daenerys’ dragons is seen flying above marching soldiers and Arya Stark, who is seeing the mythical creature for the first time, looking surprised and excited.

The clip ends with the iconic shot from the last season in which the fallen Dragon, who now a part of the Night King’s army, successfully topples the Wall that has protected the Seven Kingdoms from external threats for centuries.

But here’s the problem: We’re not even a month and half away from the last and final season of the Emmy winning show and there is still no trailer!

Ok, we got two Lion King trailers and no @GameOfThrones trailer yet. What are y’all doing over there @HBO?

me banging on hbo’s door and begging for the goddamn game of thrones trailer pic.twitter.com/XTk3aoXsee

time for hbo to release the game of thrones s8 trailer https://t.co/r4KqFx2dt1

rumors about game of thrones trailer dropping tomorrow better be true or else pic.twitter.com/1NdFemWAi6

Hoping for an actual #GameOfThrones trailer during the commercials of the #Oscars like pic.twitter.com/xvyZvJ2F45

HBO when we ask for a trailer for season 8 or game of thrones pic.twitter.com/8cJQAdsJXn

Seriously though? When are we getting the trailer?

HBO, are you listening?