Fire at government-run airshow in India destroys hundreds of cars

Fire at government-run airshow in India destroys hundreds of cars

Aero India show aims to become one of the world’s premie­r aerosp­ace events but has been troubl­ed by accide­nts
By Reuters
Published: February 23, 2019
Tweet Email 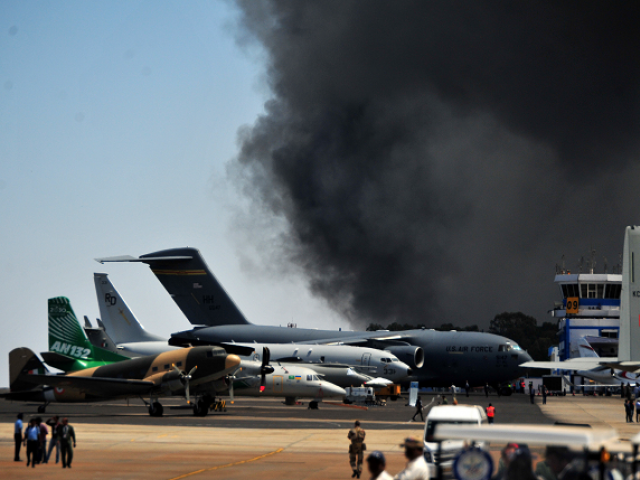 Smoke billows past a row of parked planes after a fire broke out in a parking lot during the Aero India show at the Yelahanka Air Force Station in Bengaluru, India, February 23, 2019. PHOTO: REUTERS

NEW DELHI: A fire at an airshow in India destroyed three hundred cars on Saturday, a senior fire official said, the latest accident to mar the government-run event.

The most likely cause was a “dry grass fire aided by heavy winds”, said M N Reddi, a fire official in the southern city of Bengaluru where the show is taking place. There were no reports of casualties, he added in a tweet.

The Aero India show, run by the country’s defence ministry, aims to become one of the world’s premier aerospace events, but has been troubled by accidents this year.

On Tuesday, two Indian Air Force planes collided in mid-air while rehearsing an aerobatic show, killing one pilot and injuring two others.

A spokesperson for India’s defence ministry did not respond to a request for comment.