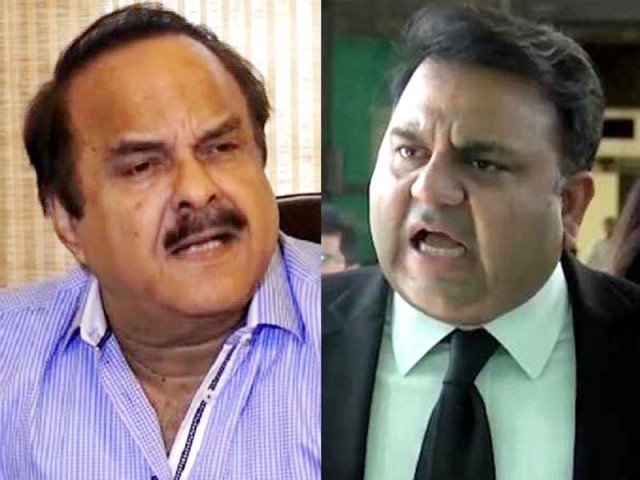 Sources say fawad chaudhry is unhappy with MD PTV and wanted to replace him. PHOTO: FILE

Information Minister Fawad Chuadhry and Prime Minster’s Special Assistant on Political Affairs Naeemul Haq have exchanged ‘barbs’ on Twitter over the appointment of top official at the state-run Pakistan Television.

Amid media reports that Fawad was unhappy with the appointment of PTV News’ Managing Director Arshad Khan and wanted to replace him, Haq tweeted on Wednesday that Prime Minister Imran Khan had full confidence in the management of PTV and wanted to turn it into an independent organisation like the BBC.

The Prime Minister has full confidence in the Board of PTV and it’s management and believes PTV should be an independent organisation like BBC and the government will take all steps necessary towards that end.

Quoting the Haq’s tweet, Fawad replied him with a poetic expression:

Following the federal minister’s tweet, the PM’s special assistant took to the Twitter again, saying that “all the newcomers in the PTI must understand and follow the philosophy of Imran Khan”.

He added that “those who do not believe in the ideology have no future in the party”.

All the newcomers in PTI must understand and follow the philosophy of Imran Khan. PTI is a strong ideological movement and its success has been due to steadfast determination of its leader to pursue justice and fairness. Anyone thinking otherwise has no future in the party.

Responding to Haq, Fawad retweeted one of his fan’s tweet, which advised Haq to contest an election if he wanted to be a politician rather than depending on friendship with Imran Khan.

All old timers must know their place. @naeemul_haque if you want to be a poltician contest elections, depending on friendship with PMIK does not give you the right to interfere in political affairs @fawadchaudhry

According to sources, the information minister also wrote a letter to the PTV MD, expressing displeasure over his performance.