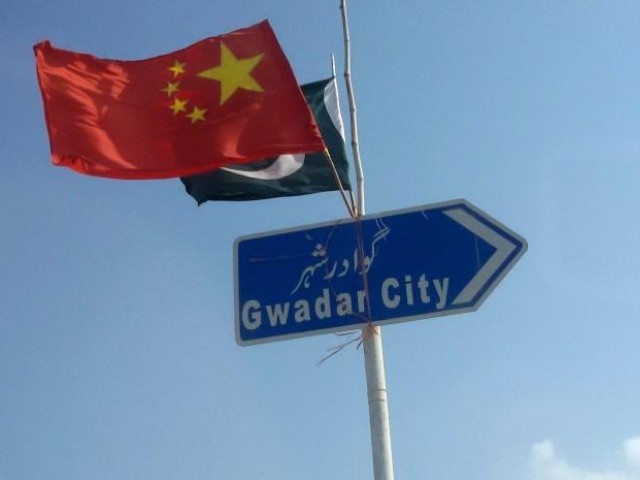 Chinese and Pakistani flags fly on a sign board along a road towards Gwadar. PHOTO: FILE

During the media briefing, Foreign Ministry Spokesperson Geng Shuang said, “The CPEC is a pioneering project of the Belt and Road Initiative and has been following the principle of wide consultation, joint contribution and shared benefits.”

When asked what’s China comment on the Saudi investment in Gwadar where the former is already undertaking a lot of mega projects, the spokesperson maintained that China and Pakistan have a consensus to welcome third parties to join the CPEC to help the region to enhance economic cooperation and connectivity.

Speaking on the issue of listing of Jaish-e-Muhammed (JeM) Chief Azhar Masood on global terrorist list, who reportedly claimed responsibility of suicide attack in occupied Kashmir’s Pulwama district, he said UN Security Council has a detailed criteria for listing of terror outfits and China will follow relevant procedures  in a constructive and responsible manner.

Earlier in 2017, China blocked Indian attempt to place the JeM chief on the global terrorist list on grounds that New Delhi had failed to provide any substantial evidence.

He noted that Pakistan and India are both important countries in South Asia and a stable relationship between the two countries is crucial to regional peace, stability and development.