India’s intell­igence offici­als can trace threat to PM's life but they fail to stop terror attack on a convoy­
By News Desk
Published: February 20, 2019
Tweet Email 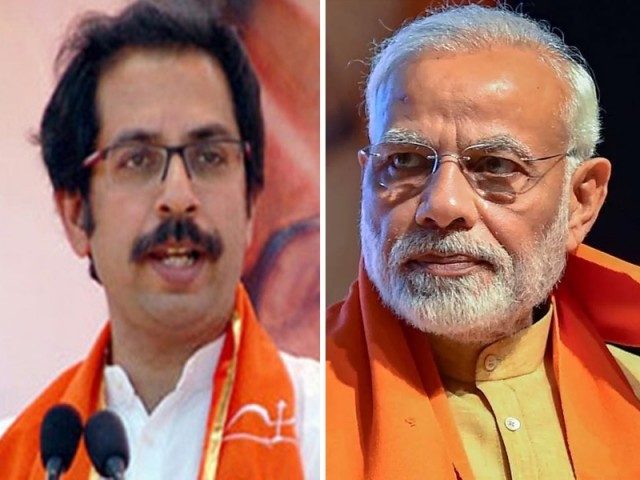 A day after signing a seat-sharing pact for the Indian state of Maharashtra, the Hindutva party told the incumbent government to not “behave in a way that would fuel allegations that it was trying to wage a war” with Pakistan merely to influence the upcoming general elections.

Shiv Sena ties up with BJP for India general election

The comments came in an editorial piece published on Saamana – the Sena’s mouthpiece. “Sometime back there were political allegations that Prime Minister Narendra Modi could wage a small-scale war to win elections… The rulers should not behave in a way that these allegations gather strength.”

Chiding the Narendra Modi-led government over the handling of the Pulwama attack, the Sena said India’s intelligence officials can trace an e-mail purportedly referring to a threat to the prime minister’s life but they fail to stop a terror attack on a convoy.”

The far-right party reminded BJP and RSS that it used to blame Manmohan Singh-led government for every attack in the country “then it should be understood if someone expects the current prime minister to uproot terrorism from the country.”

“The country is still boiling over the [Pulwama] terror attack, hence some may face criticism. (But) riots and terror attacks should not be used for political gains.”  the far-right party warned the ruling party.

“The ill-treatment of Kashmiri students in India can spill more trouble for the government,” it added.

The editorial recalled the anti-Sikh riots of 1984 after the assassination of then Indian premier Indira Gandhi. “Congress is still paying a heavy price” for politicising the issue.

It pointed out the irony in the treatment meted out to those promoting peace and others who were propagating violence in the aftermath of the India-Pakistan tensions.

Pressure mounted on Navjot Singh Sidhu after he called for dialogue with Pakistan even after the Pulwama attack. A campaign was launched against him and he was ousted from a television show, it said.

“On the other hand, the comments of BJP legislator Nepal Singh, who recently stirred a controversy with his statement that Indian Army jawans “ought to die”, were selectively ignored and he did not face any action.”