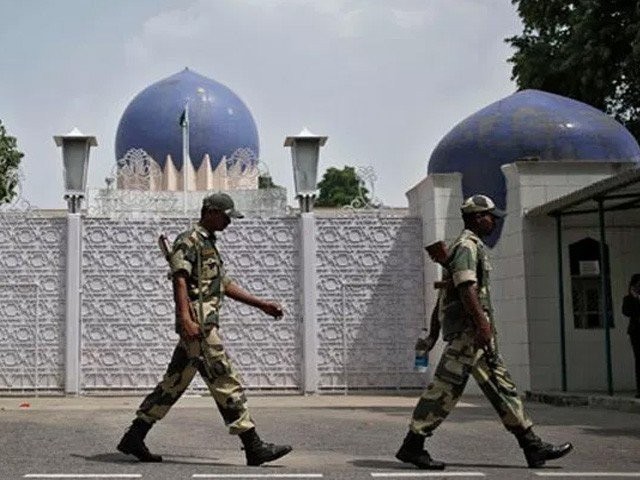 Protesters were allowed to reach and jolt the gate of the Pakistan House despite presence of Indian security officials. PHOTO: AFP

Pakistan lodged a strong protest with India regarding safety and security of its High Commission and officials after protesters tried to enter the building in New Delhi, a press release by Foreign Office (FO) stated.

Special Secretary (Asia Pacific) Imtiaz Ahmad summoned the Acting Indian High Commissioner Gaurav Ahluwalia to lodge a protest against the anti-Pakistan demonstration on February 18 during which protesters were allowed to reach and jolt the gate of the Pakistan House despite the presence of Indian security officials.

It was underscored that despite a strong protest to the Indian government, acts of harassment targeting the Pakistan HC, Pakistan House, and the officers and officials of the HC and their families continued, including abusive calls to the country’s mission in New Delhi.

The special secretary reiterated Pakistan’s demand to the government of India for a comprehensive, immediate investigation of this serious breach of security, taking foolproof measures for safety and security of the Islamabad’s mission and officials, and ensuring that such incidents do not happen again.

Tensions between the neighbours have soared since last Thursday’s attack in which at least 40 Indian paramilitaries were killed.

Prime Minister Imran Khan, in a nationally televised address, demanded India to give “actionable evidence” and that Pakistan would retaliate if attacked.