Driver­s from all over the countr­y partic­ipated in the 14th Cholis­tan Desert Jeep Rally
By Kashif Zafar
Published: February 19, 2019
Tweet Email 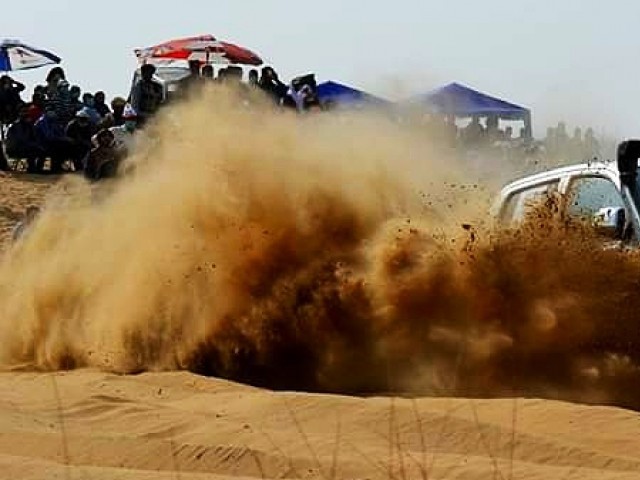 Nadir Magsi, the defending champion of the Cholistan Desert Jeep Rally, took the trophy home once again in Prepared Category A after completing the 244 kilometre course in four hours 30 minutes and 35 seconds.

“The competition is getter tougher every year,” Magsi told the media. The different rallies throughout the country have become entertaining events for fans and spectators who often travel a long way to witness such events, he said.

The 14th Cholistan Desert Jeep Rally concluded late Sunday. The extravagant event, which kicked off on February 14, lasted a total of four days. Drivers from all over the country participated in the event.

On Sunday, Punjab Tourism Minister Raja Yasir Humayun and German Ambassador Martin Kobler inaugurated the final round of the prepare category. A large number of spectators were present for the final round.

Speaking to the media, the minister stated that the Cholistan Desert Jeep Rally is a mega sports event and further steps will be taken to promote it. “There are great prospects for international tourism in the area,” he said. With the provision of better facilities, this area can become a tourist destination. He maintained that the rally will be expanded to all four provinces for which support will be provided.

German Ambassador Martin Kobler stated that the desert rally is playing an important part in helping the country express its identity. He added that he thoroughly enjoyed the event.

The last event of the Cholistan Desert Jeep Rally was the final round of the Prepared Category. A total of 33 drivers participated in the race which covered a total of 244 kilometres. The rest of the results are listed below.

In the women’s category, Tushna Patel came in first with a time of one hour and 41 minutes followed by Salma Marwat with one hour, 54 minutes and 47 seconds.

Speaking to the media, Patel said that the competition was tougher this year. “Every year, the number of women participating is increasing, which is a good sign,” she expressed.