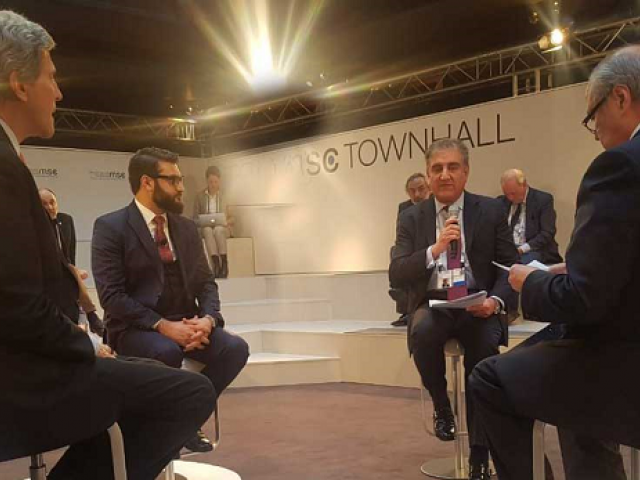 Pakistan will not allow its land to be used for terrorism, reiterates foreign minister. PHOTO: RADIO PAKISTAN

Addressing the media in Munich after the conclusion of the Munich Security Conference on Saturday, the foreign minister said that he was “more confident” after the conference that the US senators were ready to engage with Pakistan.

Foreign Minister Shah Mahmood Qureshi met Afghan President Ashraf Ghani on the sidelines of the International security conference in Munich. Both the leaders are participating in the special session pertaining to the Afghan peace process. pic.twitter.com/jEJWQNxkAQ

Pakistan will not overreact to MFN move: Razak

“Meetings with German, Canadian, Uzbek foreign ministers and Afghan president have shown that India’s claim of diplomatically isolating Pakistan has failed,” Qureshi told reporters. He urged India to “look at the wider picture and think beyond its elections”.

About the Pulwama car bombing, Qureshi said it was an unfortunate incident and stressed that Pakistan had never been in favour of violence, “be it today or yesterday”. He reiterated that Pakistan would not allow its land to be used for terrorism.

The foreign minister said that a blame game without any investigation was regrettable. “Blame game never achieved anything,” Qureshi said. “India should prioritise peace and stability in the region.”

Separately, speaking with the Voice of America, Qureshi said Indian attempts to isolate Pakistan in the comity of nations had failed in the past and these would fail in the future also. He regretted the loss of lives in the Pulwama attack, but said that violence had never been “on our agenda”.

Qureshi said India reacted to the incident without any investigation. “India had been blaming Pakistan without investigation in the past,” he said. “If India has any proof, it should present them. We are ready to cooperate.”

He called for soul searching in India to find out the reasons as to why the Kashmiri people were protesting. “Pakistan cannot force thousands of women to come out on the streets,” Qureshi said. “Do we organise the funerals in Kashmir? We cannot do that even if we wanted to.”

He stressed that the Kashmiri people had come out for the protests on their own. “India with its policy and behaviour is losing Kashmir,” the foreign minister added.

In Islamabad, meanwhile, the Foreign Office on Saturday strongly condemned the continuing attacks on the Kashmiris in the aftermath of the Pulwama attack, saying that Kashmiri students were being systemically targeted in India while the authorities stayed complicit and inactive.

In a tweet, Foreign Office spokesperson Dr Muhammad Faisal urged India not to use the Pulwama attack as a carte blanche to intensify its atrocities against innocent Kashmiri people in the occupied territory.

The tweet comes after Indian police arrested 13 youth during raids in south Kashmir’s Pulwama and Islamabad districts. The arrests were made in connection with Thursday’s car bombing at Lethpora in Pulwama that left 49 Indian soldiers dead.

Barely hours after the blast, which was claimed by the Jaish-e-Muhammad (JeM) group, India pointed the finger at Pakistan. The Indian government, vowing revenge for the attack, said it was withdrawing the Most Favoured National (MFN) status for Pakistan.

The Foreign Office rejected Indian allegations. And in a move against the “baseless allegations,” the Foreign Ministry summoned Indian Acting Deputy High Commissioner Gaurav Ahluwalia on Friday, lodging a protest over the allegations.

Also as part of a diplomatic offensive to counter Indian attempts to link Islamabad with the Pulwama attack, Pakistan on Friday reached out to the five permanent members of United Nations Security Council (UNSC) to offset the Indian propaganda.

On Saturday, Foreign Secretary Tehmina Janjua met Islamabad-based diplomats from the non-permanent members of the UNSC and the European Union (EU) countries and apprised them of Pakistan’s point of view in response to “baseless” Indian allegations.

Janjua told the diplomats that Pakistan wanted peaceful relations with all its neighbours. She regretted that India levelled allegations against Pakistan without any investigation. “Indian claims of Pakistan’s involvement in Pulwama attack are contradictory,” she said.

The foreign secretary added that unverified social media content had no grounds. She stressed the importance of implementing the UNSC resolutions on Kashmir.

Meanwhile, a round-the-clock curfew was imposed in Jammu after mobs attacked Muslim properties and set fire to vehicles. At least 12 people were injured, local media reported, and internet access in the area was suspended.

Separately, at least one senior Indian army officer was reportedly killed and a soldier injured in an improvised explosive device (IED) explosion in the Rajouri district along the Line of Control (LoC), on Saturday, local media reported.

Elsewhere in the occupied region, thousands of people attended the funeral prayers in absentia for a youth, Aadil Ahmed Dar, in Gandi Bagh area of Pulwama. Relatives also held funerals for the slain soldiers in their hometowns.

The Joint Resistance leadership, comprising Syed Ali Geelani, Mirwaiz Umar Farooq and Muhammad Yasin Malik, in a statement in Srinagar said, the people and leadership of Kashmir regret every killing that happens in the territory.

The Mirwaiz also denounced the assault on Kashmiri students in Chhattisgarh, where at least four Kashmiri students were critically injured after goons and students from the Indian states of Maharashtra and Bihar beat them up ruthlessly in a hostel.

(With additional inputs from agencies)