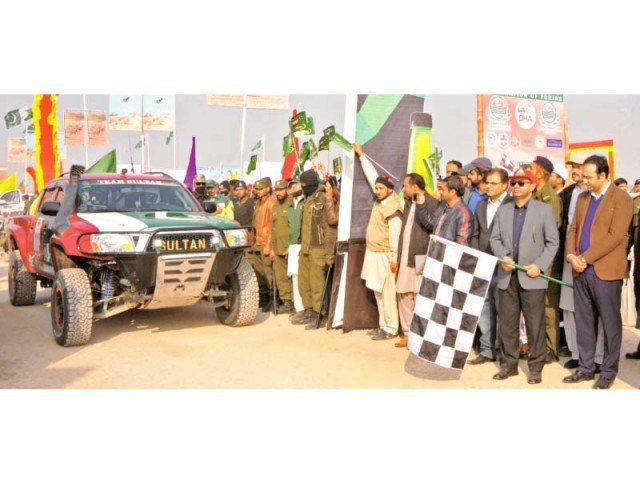 Bahawalpur Division Commissioner Nayyar Iqbal flagged off the 14th Cholistan Desert Jeep Rally’s prepared category on Friday. In the first phase Nadir Magsi’s vehicle was the first to leave at 9am.

Speaking on the occasion, the commissioner said in a short span of time Cholistan Desert Jeep Rally has evolved into a popular sports event. “In the beginning the race covered only 100 kilometres but now its track has expanded up to 500 kilometres covering three districts,” he said. He also lauded the efforts of the Punjab Tourism Development Corporation (PTDC), Pakistan Army, divisional and district administration and the media in the popularising of the event.

Earlier, Punjab Tourism Development Corporation Managing Director Ahmad Malik said the event has become the identity of the area which has introduced this area to the world. “It has become the biggest brand of the PTDC,” he remarked.

Desert Jeep Rally champion Nadir Magsi said Pakistan has the best suitable areas for this sport and in holding this event, services of the government and the private departments including the Nawab family could not be overlooked.

President of the 4×4 Club Mehmood Majeed said they remain vigilant in Cholistan until the arrival of the last vehicle during the jeep rally and serve alongside the government departments.

Cholistan Desert Jeep Rally started from February 14 and will conclude on Sunday (tomorrow). The inauguration ceremony was held on February 14 followed by vehicle registration and qualifying round, musical night. On February 15, the first round of the prepared category followed by formal ceremonies was held.

This year more than 100 drivers have been registered to contest in the mega event while five female drivers are also participating in the event.

Strict security arrangements have also been made in this regard while security of the route has been assigned to the Pakistan Army and to ensure uninterrupted traffic flow. Police emergency control room has been established at Derawar.

To counter any unpleasant incident Emergency Mini Operation Theatre at Basic Health Centre Derawar has been established in which general surgeon and an orthopaedic surgeon will remain present round the clock for three days. Tehsil headquarters hospital Yazman and Ahmadpur East has allocated five beds each and eight 4×4 ambulances have also been deployed on the routes.