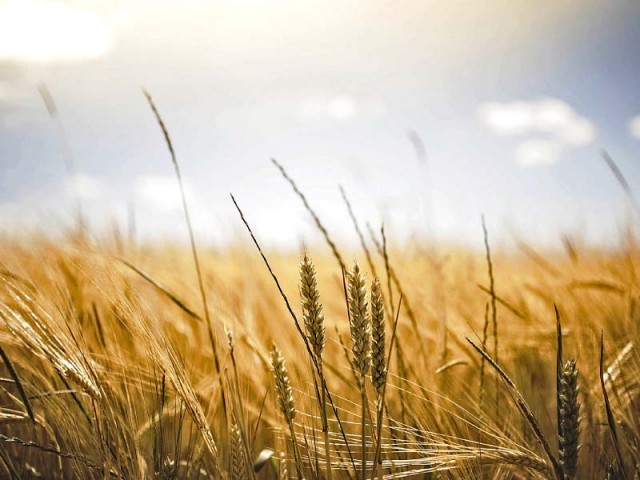 An agricultural expert believes the government has to award subsidy on export to make it commercially viable. PHOTO: FILE

KARACHI: After producing surplus wheat in the past two years, Pakistan has decided to export 500,000 tons of the grain ahead of the arrival of new stock from March-April 2019.

The government is expected to earn Rs16.4 billion (or $117 million) from the volume set aside for export as it has offered to sell the grain at Rs32,759 per ton.

“The ECC (Economic Coordination Committee) of the cabinet has decided to sell half a million tons of wheat, including 400,000 tons by sea and 100,000 tons by land at the already received rate ie Rs32,759 per ton,” Pakistan Agriculture Storage and Services Corporation (Passco) said in a notification on Thursday.

An agricultural expert, however, believes the government has to award subsidy on export to make it commercially viable for cross-border traders keeping in view the comparatively low prices in the global market.

According to the Pakistan Bureau of Statistics (PBS), Pakistan has exported wheat at an average price of $210.5 per ton in the past six months (July-December 2018) compared to the offered price of $234 per ton (Rs32,759).

Passco – the state-owned agency responsible for maintaining stocks of wheat and other crops to avert shortage in the country and also responsible for conducting import and export operations for crops – achieved the Rs32,759 per ton price for wheat export in January through open bidding for 100,000 tons and wanted to sell another half a million tons at the same price.

“The highest rate ie Rs32,759 per ton was received through open bidding,” the agency said. The price was higher than the procurement rate of Rs32,500 per ton, it was learnt.

“Parties/bidders, who participated in the tender opened on January 11, 2019 and have not withdrawn their earnest money, are required to submit their willingness for the purchase of wheat at the rate of Rs32,759 along with quantity details,” it said.

“Besides, fresh applications are also invited on first-come-first-served basis from interested parties for the purchase of wheat (for export) at the already approved rate ie Rs32,759 per ton,” it added.

The country established the surplus stock following it produced higher grains than the local requirements in the past two years.

“The country produced 25.5 million ton wheat alone in the last year (2017-18) against an estimated requirement of 24.4 million tons. This was in addition to the previous carryover stock of the grain at the beginning of the last wheat harvesting season,” he said.

This year too, Pakistan is estimated to produce a total of 25.5 million tons wheat – around one million ton higher than the local requirement, he said. He said the government may have to give subsidy on export to make it commercially viable. Potential markets for Pakistan wheat include Afghanistan, UAE, Indonesia, Oman and Sri Lanka. Mughal added the other potential markets could include Iran and Malaysia.