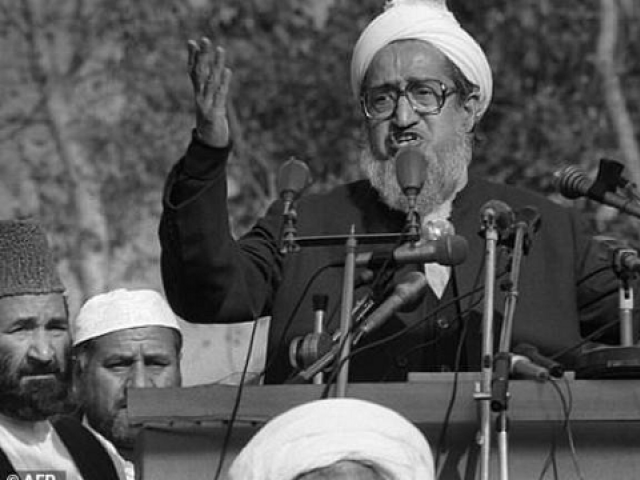 KABUL: An Afghan militant commander who fought the Soviets and rose to become the country’s first president after the Red Army retreated has died aged 93, his family said Tuesday.

Sibghatullah Mojaddedi, who commanded a militant faction during the decade-long insurgency against the Soviet occupiers, passed away late Monday in a Kabul hospital after a long illness.

“He has played a vital role in all national issues and his legacy will remain part of Afghanistan’s history,” he posted on Twitter.

Sad to hear of the demise of #Sebghatullah Mujaddadi Leader of AFG National Liberation Front, former Interim President & Chairman of Afghanistan’s Constitutional Loya Jirga. He has played a vital role in all national issues & his legacy will remain part of Afghanistan’s history. pic.twitter.com/UMYqisyTm6

Mojaddedi’s death comes three days before the 30th anniversary of the Soviet withdrawal from Afghanistan.

The Red Army crossed the Amu Darya river into Soviet Uzbekistan on February 15, 1989 having suffered 15,000 losses.

After the withdrawal, Afghanistan’s communist regime collapse in 1992 and Mojaddedi, who led the Afghan National Liberation Front, was chosen as interim president.

He served just two months under a power-sharing deal struck by militant leaders. These factions later turned on each other and Afghanistan plunged into civil war.

But Mojaddedi continued to play a prominent role in Afghan politics, particularly after the fall of the Taliban in 2001.

In 2003, Mojaddedi served as chairman of the Loya Jirga — or Grand Assembly — that approved Afghanistan’s new constitution for a post-Taliban era.

He also chaired a four-day gathering of around 2,500 tribal elders in 2013 to endorse a security agreement under which the United States would keep troops in Afghanistan to train Afghan forces and conduct counterterrorism operations.