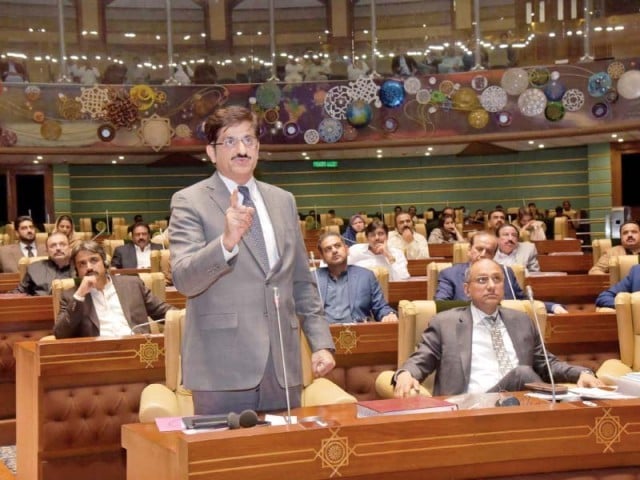 KARACHI: Waking up to the existence of a “police state” in the province, the Sindh Chief Minister Syed Murad Ali Shah expressed dismay on Monday over the police’s performance in handling the “cold-blooded” murder of Jeay Sindh Tehreek’s Karachi president Irshad Ranjhani. The chief minister ordered to register an FIR against the area’s police personnel and arrest them for their criminal negligence.

CM Shah was responding to the Muttahida Majlis-e-Amal MPA Abdul Rashid’s point of order in the Sindh Assembly session on this horrific murder. “The video clip available on social media portrays an inhumane and gory picture,” he said. “The UC Nazim Rahim Shah, who killed the man, acted like judge, jury and executioner at the scene and flaunted the rule of gun over there,” he added.

When he came to know about the incident, the CM said, he had asked the Sindh Police chief IGP Kaleem Imam to properly investigate the matter. But the police, without conduting a proper investigation, called the deceased a dacoit.

“After 24 hours, when the police did not give any tangible results, I asked the chief secretary for a judicial inquiry,” he said, adding that the local police was involved in the murder. “I order to register an FIR against the cops for their criminal negligence,” said the CM. “We have passed a law in this Assembly to shift injured to the hospital without any legal formality so that their life can be saved. The man, who is the alleged robber, was shot five times and was bleeding from his mouth, requesting everyone on the spot to save his life. Instead of shifting him to a hospital, the cops took him to the police station which resulted in his death,” the CM remarked.

But the CM questioned the police’s modus operandi. “When asked about the progress in this case, the police officers argue that there were cases against the deceased. Does it mean we kill all people implicated in FIRs? I have strictly asked the IG and Karachi Additional IG to act as professional police officers, otherwise I will take action because I have to maintain law and order and establish the writ of the state,” said CM Shah.

He asked the other lawmakers in the Assembly to support him while he takes action against police officers who had established a state within a state. “I will personally go and register cases against cops for their negligence if the senior police officials are reluctant,” said the chief minister, besides announcing that he will meet the chiefs of the Sindh High Court and the apex court before bringing drastic reforms to the police culture in Sindh.

Earlier, MMA MPA Abdul Rashid, while referring to Ranjhani’s killing, said, “The UC Nazim has not only violated the law, it was inhumane to not allowpeople to transfer the victim to a hospital. He must be punished for it,” he said, adding that the incident occurred at 4:45pm, while the body had reached the Jinnah Postgraduate Medical Centre at 6:37pm.

Earlier, the chief minister wrote a letter to the Sindh Police chief, expressing serious concern over the unprofessional handling of Irshad Ranjhani’s murder case. “I am writing this letter in utter dismay with regard to the unfortunate incident wherein Irshad Ranjhani was shot dead on February 6.”

Referring to UC Nazim Rahim Shah, the CM said, “Even if Rahim Shah’s claim turns out to be true, the law does not give him the licence to kill and take the law into his own hands. This verdict remains the domain of the courts of law.”

According to the chief minister, the incident has shaken the “writ of the state” and dented the confidence of the people in the government’s ability to protect and safeguard their lives. “Police forces exhibited an irresponsible attitude and did not reach the scene on time, which resulted in the victim’s death,” the letter states. “As the chief executive of the province, I shall not act as a bystander and watch the fiasco like above shatter the image of the provincial government. It is my constitutional responsibility to ensure that the principles of natural justice and fair play are adhered to by the departments and agencies of the provincial government.”

The CM further directed the IG to expedite the investigation and fix responsibility on the delinquent officers who mishandled the entire incident. “In view of the above, you are directed to report in this regard and should reach my office within 48 hours.”