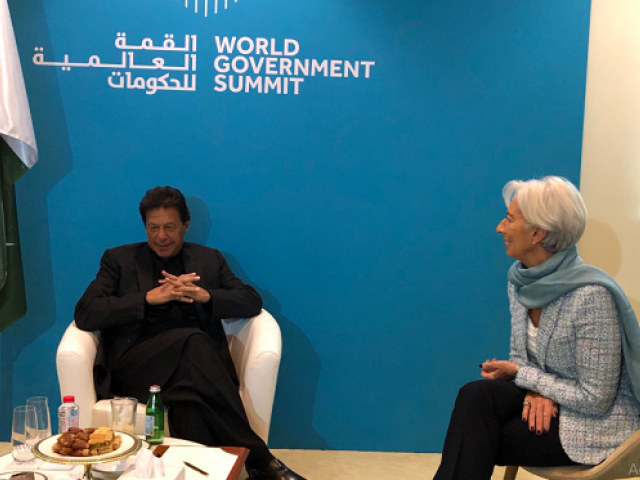 A view of meeting in Dubai. PHOTO: TWITTER/@Christine Lagarde

The development took place during a meeting between Lagarde and Prime Minister Imran Khan in Dubai on the sidelines of the World Government Summit, hosted by the United Arab Emirates.

It is the first high-level meeting between PM Imran and the IMF top management.

“I also highlighted that decisive policies and a strong package of economic reforms would enable Pakistan to restore the resilience of its economy and lay the foundations for stronger and more inclusive growth,” an IMF handout quoted the MD as saying.

Don’t miss the boat to invest in Pakistan, says PM at 7th WGS

But both the sides have agreed to “remain engaged” to narrow down differences on policy actions that are required to qualify for the programme that Pakistan is negotiating since November 2018.

The IMF described meeting with the PM as “constructive” but the tone of its brief handout suggests that the IMF top management endorsed the stance of the IMF staff that is negotiating with Pakistan.

In September last, Pakistan had decided to negotiate a bailout package to avoid default on its international debt obligations.

But things are not moving at Pakistan’s desired pace due to the Pakistan Tehreek-e-Insaf (PTI) government’s reluctance to take politically unpopular decisions.

The IMF is not satisfied with the previous increase in electricity and gas prices and is seeking further upward adjustments in tariffs, according to the sources. The IMF has also demanded a complete and meaningful free float exchange rate regime, which the government is not ready to concede.

IMF assures Pakistan of support in shoring up economy

Despite extremely low level of foreign currency reserves, which too built by taking loans from Saudi Arabia and the United Arab Emirates, the PTI government is also pumping dollars in the market to defend the value of the rupee.

The third major area is the fiscal policy, as despite presenting two supplementary budgets the budget deficit is expected to remain around last year’s level of 6.6% of the Gross Domestic Product. The sources said the IMF was also asking for a permanent solution to the circular debt and commodity operations, estimated over Rs2 trillion.

The IMF staff, led by its Washington-based chief Harald Finger, has demanded of Pakistan to take some of these measures upfront before holding of the executive board meeting. The IMF wanted that some of the remaining measures should be taken in the first year of the programme.

The government is willing to take most of these measures but it differs with the timing and pace suggested by the IMF.

Finance Minister Asad Umar is more inclined to spread these tough policy actions over the three-year period of the proposed package.

The finance minister told the PM’s Economic Advisory Council last week that the current IMF demands were not in the interests of Pakistan and would put unbearable burden on the masses.

In this background, the meeting between PM Imran and Lagarde was arranged for half an hour, according to people privy to the decision.

The IMF handout stated that Lagarde had a good and constructive meeting with Imran, during which “we discussed recent economic developments and prospects for Pakistan in the context of ongoing discussions towards an IMF-supported programme”.

She reiterated IMF’s support for Pakistan, but sought decisive actions.

“As emphasised in the new government’s policy agenda, protecting the poor and strengthening governance are key priorities to improve people’s living standards in a sustainable manner,” she added in the handout.

The Ministry of Finance also issued a handout on the PM’s meeting that did not shed much light on the discussions.

The Finance Ministry’s handout stated that PM Imran appreciated the IMF’s support to Pakistan and shared his vision of nation-building.

He reiterated the government’s commitment for undertaking structural and governance reforms and strengthening social protection in the country.

“It is also politically difficult for the government to take unpopular actions due to thin majority that it enjoys in the National Assembly (NA). Due to some differences among the coalition partners, the PTI government had prorogued the NA session that had been called to approve the supplementary Finance Bill without general debate on it,” stated the handout, quoting the PM. “Now the PTI has decided to give two cabinet berths, one each in Punjab and Centre, to PML-Q – its important ally. The session will be held this week.”

Special Assistant to the PM on Media Affairs Iftikhar Durrani said, “After conclusion of debate on supplementary Finance Bill in the Senate, the government has called the National Assembly session on February 18.”

According to the Finance Ministry, “The IMF MD acknowledged the steps taken so far by the Pakistan government for stabilising the economy and will remain engaged in supporting Pakistan in sustaining its economic recovery.”

The two sides agreed to work together on policy priorities and reforms aimed at reducing imbalances and laying the foundations of a job creating growth path in Pakistan, according to the Finance Ministry.

Deliberations between Pakistani authorities and the IMF staff would continue to finalise an agreement on the contours of a programme, it added.