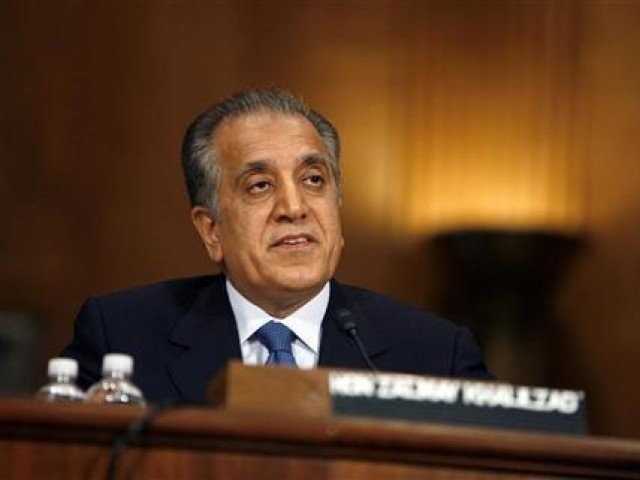 WASHINGTON DC: The US diplomat leading talks with the Taliban said Friday he hoped to see a peace deal in place before Afghanistan’s July presidential elections, though he cautioned he did not trust America’s long-time adversary.

Zalmay Khalilzad, a former ambassador to Afghanistan who has spoken extensively with the Taliban in recent weeks, also stressed that any US troop withdrawal would be dependent on conditions on the ground, and not on any particular timetable.

The talks come as President Donald Trump pushes to end the Afghanistan conflict, where about 14,000 US troops are still deployed and which has seen countless thousands of civilian and military deaths.

“The timing of a peace settlement from our point of view is the sooner is better,” Khalilzad told an audience at the US Institute of Peace in Washington.

LIVE: U.S. Special Representative Zalmay Khalilzad (@US4AfghanPeace) speaks on the prospects for peace in Afghanistan. Follow along with the hashtag #AfgPeace. https://t.co/hnECY64izD

Elections in Afghanistan had originally been slated for April 20 but were postponed for three months as peace talks progressed. President Ashraf Ghani, who was elected in a fraud-tainted poll in 2014, is seeking a second term.

Khalilzad last week announced a “draft framework” for a peace deal, though he warned that major hurdles remain.

Critics are skeptical for a number of reasons, primarily because talks have not yet included the Afghan government, which the Taliban considers US-backed puppets.

Intra-Afghan negotiations are a “key objective” for the US, Khalilzad said, noting the Taliban and the Afghan government “must sit across the table and come to an agreement.”

Additionally, the Taliban have promised not to shelter foreign extremists, but experts say they cannot be trusted and even now are helping to hide such militants.

Khalilzad repeatedly stressed the US would not leave Afghanistan without enforcement mechanisms in place to ensure Afghanistan does not become a militant safe haven.

“Our vision long term is for an Afghanistan that’s entirely sovereign, independent. If they decide that they don’t want to have foreign troops, we don’t want to stay where we are not wanted — provided that there is no threat to our national security from Afghanistan,” Khalilzad said.

“That is a red line, and I think that’s a policy of the (US) president as well.”

Khalilzad has in recent months held multiple meetings with Taliban officials in Qatar, where the group’s senior leaders have an office in the capital Doha.

The Taliban told him they realize Afghanistan is different from when they were ousted in 2001 — when the hardline militants subjugated women, barred girls from school and wiped out any number of freedoms.

“They understand that they cannot go back” to how things were, the US negotiator said.

“We do not trust the words of any of the protagonists,” Khalilzad added, noting that US-backed values such as press freedom and women’s rights “must be respected.”

“Nothing is agreed to until everything has been agreed to,” he said.
Taliban leaders this week spent two days in talks in Moscow for an extraordinary summit that saw Afghan political figures from outside the government meeting with former sworn enemies.

No timetable for US withdrawal from Afghanistan, asserts Khalilzad

All parties agreed to support the Doha peace talks with US negotiators that Trump on Tuesday described as ‘constructive.’

A statement issued on behalf of all parties also agreed on the complete withdrawal of foreign troops from Afghanistan.
But such a move is up to the Americans.

Khalilzad on Thursday took to Twitter to deny a Taliban claim that a withdrawal timetable was in place.

He added that he welcomed Moscow’s role in talks.

“I am not seeking to monopolise the diplomacy of peace,” he said, and also offered praise to Pakistan, which he credited for helping push the Taliban to the negotiating table.

Khalilzad thanks Pakistan for facilitating talks with Afghan Taliban

Afghanistan has suffered nearly constant conflict since the Soviet invasion of 1979, which was followed by civil war, the Taliban regime, and the US invasion in late 2001.

Khalilzad was a major player in George W Bush’s administration when the United States first invaded Afghanistan after the September 11, 2001 attacks.