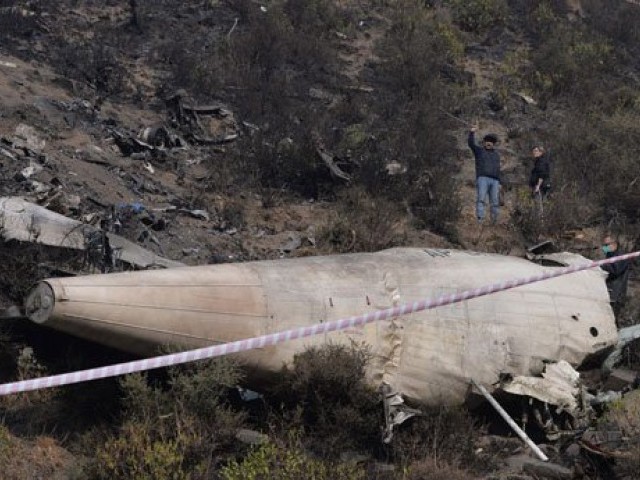 En route to Islamabad, PIA flight PK-661 from Chitral crashed in the hills of Gagan near Havelian city. PHOTO: AFP

ISLAMABAD: The Islamabad High Court (IHC) on Thursday strongly censured the Civil Aviation Authority (CAA) over its failure in completing the inquiry into the 2016 Havelian plane crash despite a passage of 26 months.

The court was hearing a petition for a judicial investigation into the accident filed by the mother of the ill-fated flight’s co-pilot.

Rejecting the CAA’s request for eight more months to complete the probe, Justice Aamir Farooq ordered the authority to submit the inquiry report by the first week of March.

The directives come 26 months after the Pakistan International Airlines (PIA) flight PK-661 from Chitral crashed in the hills of Gagan, some seven kilometres away from Havelian city.

Among the 48 passengers and crew on the Islamabad-bound flight was popular singer-turned-evangelist Junaid Jamshed, two Austrians, and a Chinese national. The plane was an ATR-42 turboprop aircraft.

During the hearing, the court was informed that several parts of the aircraft were made by French and American firms and the investigation was being delayed because of slow-paced communication with the manufacturers.

On this premise, the CAA presented a request for more time to complete the inquiry which was rejected by Justice Farooq. The judge ordered the aviation authority to finalise the report for submission at the next case hearing, which will be scheduled in the first week of March.

In another case, the IHC directed the Establishment Division to implement minority quota in new recruitment in government departments and disposed of the petition.

During hearing, the petitioner’s counsel pleaded before the bench that the National Testing Service had ignored the minority quota during recruitment of staff in lower courts.

He said legal requirements were not followed in the recruitment procedure.

He prayed the court to issue directives for implementation of minority quota in recruitment in government departments.

After hearing the arguments, the court directed the Establishment Division to implement the minority quota keeping in view their rights and adjourned the case.

Separately, the IHC dismissed a petition seeking cancellation of a bail of an accused allegedly involved in molesting a woman.

Justice Mohsin Akhter Kiyani conducted the hearing on a petition filed by a woman resident of Jhang.

During the hearing, the bench expressed concern over misuse of social media and observed that why the society was indulging in filthy acts.

Justice Kiyani remarked that the people didn’t know how their lives had been made ‘a curse’.

The personal lives of people were not safe from social media, he added.

On a query, the case’s investigation officer informed the bench that the petitioner woman couldn’t produce any witness or evidence. On this, the court dismissed the petition, seeking cancellation of the accused’s bail.

Earlier, the counsel for woman informed the court that after having friendship with the accused his client came here to meet him from Jhang. However, the accused left her after some days.

The IHC also reserved its judgement in a petition of the Federal Investigation Agency (FIA), seeking time to present 19 Indian witnesses in the Mumbai attack case.

The FIA apprised the bench that the department had located 19 more witnesses in the case and sought the court’s permission to produce them before the Anti-Terrorism Court hearing the Mumbai attack case.

The official said that the ATC had earlier rejected the FIA request to produce these witnesses before the court.

After hearing the arguments, the bench reserved its judgement on the matter.

It is pertinent to mention that the IHC had already turned down the FIA’s request to halt the Mumbai attack case proceeding in ATC.