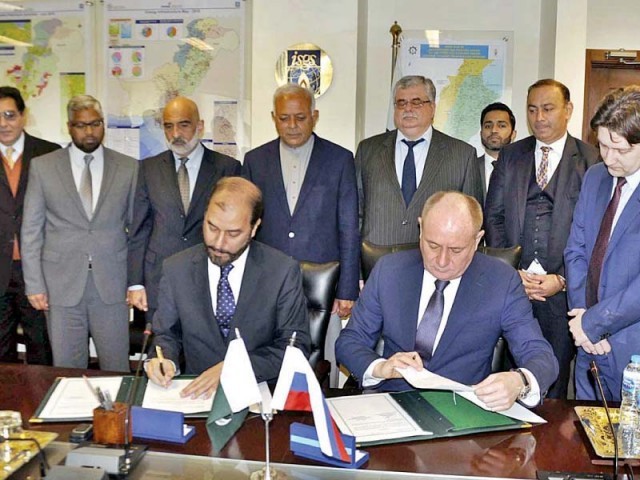 In the first instance a feasibility study would be conducted by Gazprom at its own cost with no financial implications on Pakistan. PHOTO: APP

ISLAMABAD: Russia has come up with an integrated investment package of $14 billion for the energy sector in Pakistan.

During a recent visit of the Russian delegation, headed by Gazprom Management Committee Deputy Chairman Vitaly A Markelov, the Russian side pledged an investment of $14 billion in offshore gas pipeline project, North South Pipeline Project and underground gas storages in Pakistan.

The officials said that they would invest around $10 billion in offshore gas pipeline project, $2.5 billion in the North South Pipeline Project and the remaining on building underground storages in Pakistan. The Russian companies would build gas pipeline from Karachi to Lahore to transport imported gas for meeting the needs of the gas-starved province. Recently, the government faced a severe gas crisis, which can be prevented by underground storages, said an official. The storages would help store imported gas allowing meeting rising gas demand at any time, particularly in winters, he added.

Meanwhile, Pakistan and Russian state run entities on Wednesday signed inter corporate agreement to conduct a feasibility study of the $10-billion offshore pipeline project. Under this project, Russian company, Gazprom, will conduct feasibility steady to build offshore pipeline from Iran to Pakistan. The pipeline construction is expected to be completed in three to four years. Inter State Gas Systems (ISGS) Managing Director Mobin Saulat and Markelov signed the agreement in the Petroleum Division.

Earlier, the Ministry of Foreign Affairs irked Russia by refusing to sign the agreement in the presence of Prime Minister Imran Khan at the PM Office. This move came as a contrast to when the American energy giant – Exxon Mobil – was welcomed grandly to engage in offshore drilling, with the agreement being signed at the Prime Minister’s Secretariat.

The Ministry of Foreign Affairs stated that it does not support signing of the agreement either in the presence of Prime Minister Imran or at the PM Office as the same is a commercial agreement between two commercial entities, said Farooq, adding that it would be appropriate if an alternative venue is selected.

The Petroleum Division had approached the PM Office requesting to hold the signing ceremony at the Prime Minister’s Office. In a letter, the Petroleum Division said that the petroleum secretary had spoken to the additional secretary Europe-2 ministry of foreign affairs regarding signing of the agreement proposed to be held at Prime Minister’s office on February 6. However, the additional secretary Europe did not give any cogent reason as to why the signing ceremony should not be held at the PM Office.

In the first instance a feasibility study would be conducted by Gazprom at its own cost with no financial implications on Pakistan. Certain economic benefits such as transit fee would accrue to Pakistan if the project is implemented. Moreover, the project would bring Pakistan on the world map as the transit country for offshore gas pipelines. Besides, Pakistan will also have an option to off take gas from the transit gas pipeline.

Russia holds huge gas deposits in Iran and has offered Pakistan and India gas exports by laying an offshore pipeline that will pass through Gwadar Port. Russia has been a big gas exporter to EU countries and Turkey since long and despite US anger, the European bloc has continued to make imports to meet its domestic needs. Moscow receives gas from Turkmenistan and then exports it to EU states. It has got and managed gas deposits in Iran as well and is looking to gain foothold in the Pakistani market.

According to a statement, Minister for Petroleum Division Ghulam Sarwar Khan appreciated the expanding trajectory of bilateral relations between Russia and Pakistan. Khan welcomed Gazprom’s interest in off-shore gas pipeline project and termed it a manifestation of multifaceted cooperation between the two countries. This project envisages transporting of gas molecules from Gazprom’s sources in the Middle East onwards to Pakistan with a possibility of extending it further to South Asian countries.

The pipeline would follow an integrated approach including other ancillary projects such as underground gas storage, desalination and other power projects. Pakistan will import some 500 million to one billion cubic feet of gas from Russia daily, which would be transported via sea link, the agreement stipulates.