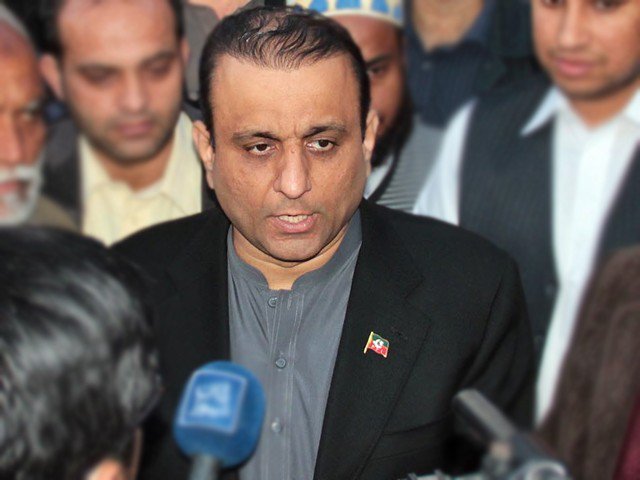 LAHORE: Pakistan Tehreek-e-Insaf (PTI) stalwart and the Senior Minister of Punjab, Aleem Khan, was taken into custody by the National Accountability Bureau (NAB) on Wednesday for having assets beyond known sources of income.

Khan was arrested after he appeared before the anti-graft watchdog in a case pertaining to the offshore company revealed in the Panama Papers leaks as well as accumulating assets beyond known sources of income. After his arrest, Khan stepped down as the provincial minister.

“Arrest of [the] accused is necessary to unearth other assets which accused might hold in his ownership or in the ownership of his Benamidar and for the collection of evidence and concluding the inquiry/investigation in accordance with law,” NAB said in a press released.

The director general of NAB Lahore dismissed the “favourites” rhetoric, saying that the bureau was working in the national interest and without any discrimination. “Chairman Justice (retd) Javed Iqbal has directed NAB to take action against corrupt elements,” he said.

“All mega corruption cases are being dealt on merit and will reach their logical conclusion,” he added. The NAB statement said that the provincial minister and one of the top lieutenants of the ruling party in Punjab, will be presented before an accountability court on Thursday (today). 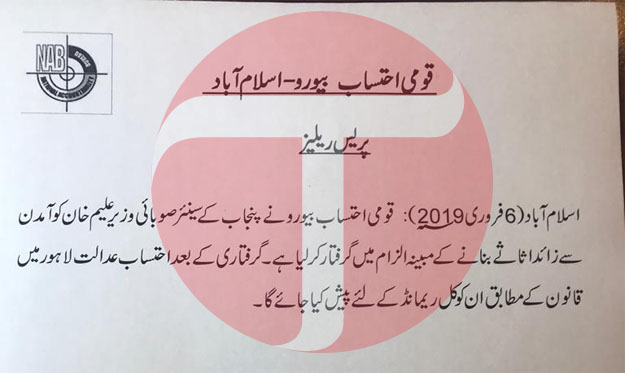 NAB had earlier summoned Khan twice but he failed to convince the accountability watchdog. Later, NAB asked him for more documents in the case. It was found out during the investigation that the Khan owned many flats in the United Arab Emirates (UAE) and the United Kingdom (UK).

NAB had also opened a probe against Khan in Hexam Investment Overseas Limited, an off-shore company. He was also facing investigations into the Park View Housing Society. The bureau had also started investigation into the assets owned by Khan’s relatives and friends.

NAB alleged that Khan, being the secretary of the “Parkview Cooperative Housing Society”, a member of the Punjab Assembly and Minister for Information Technology, held “Public Office” and “during the said period accused has been involved in the acts of corruption and corrupt practices”.

NAB also alleges that he accumulated assets beyond known sources of income within Pakistan and outside. “The accused established multiple companies with the purpose of real estate business and invested millions of rupees,” it said.

Recovered land to be used for public interest : Aleem Khan

“Accused bought more than 900 kanal land in different Mauzas of Lahore in the name of his company M/s A&A Pvt. Ltd. and also paid advances for additional 600 kanal land for which he could not account for the sources of the said investments.”

The statement said that in 2005 and 2006, apart from the inland assets, Khan established offshore companies in the UAE and the UK. “Said offshore companies acquired assets of extensive value which are beyond known sources of income of the accused,” it added. “It is likely that accused may tamper with the prosecution evidence through coercion, criminal inducement and criminal intimidation.”

Addressing the media at an event in Islamabad, Federal Information Minister Fawad Chaudhry said that the Khan’s resignation from the Punjab cabinet indicated “a change in culture” under the Pakistan Tehreek-e-Insaf (PTI) government.

The senior Punjab minister sent his resignation to the chief minister as soon as he came to know about his arrest orders, Chaudhry told reporters. “The way Aleem Khan tendered his resignation depicts a clear difference in culture,” he added.

“It tells a lot about prevailing culture in the PTI and other political parties,” he said, adding that the opposition parties would now find it difficult to come up with further criticism [against NAB and the government].

The minister said that the ruling party fully backed the ongoing accountability process, and stood with state institutions. “Stability of institutions ensures Pakistan’s stability,” he added. “NAB is doing its job and the government had nothing to do with it.”