Karachi, are we going to be able to build castles on top of dung heaps?

Karachi, are we going to be able to build castles on top of dung heaps?

Karach­i is not Dubai as the govern­ment envisi­ons it, say urban planne­rs.
By Cheree Franco
Published: June 17, 2011
Tweet Email 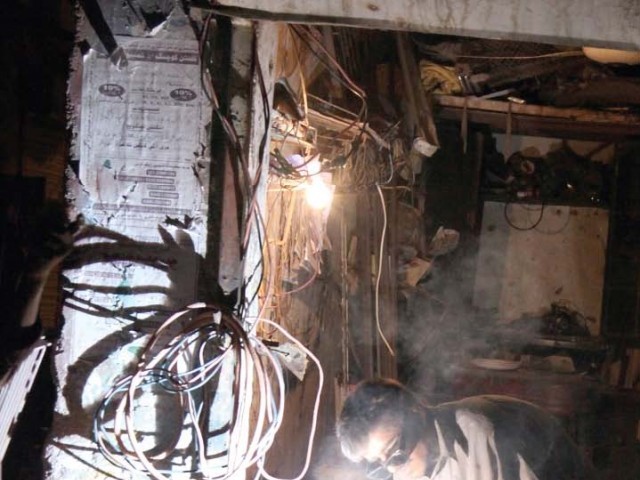 Seventeen-year-old Farooq solders his “charpai” frame at midnight in a workshop in the unplanned settlement of Neelum Colony where people live side by side with small businesses. PHOTO: NEFER SEHGAL/EXPRESS

“We think we’re going to build castles on top of dung heaps? Karachi is a katchi-abadi city, a city of squatters, slums,” said Roland deSouza, an engineer and speaker at a seminar by the urban activist group SHEHRI-CBE.

On Thursday about 75 engineers, architects, city planners, students and journalists gathered at the Institute of Engineers Pakistan to ponder the implications of pending changes to the Sindh High Density Development Board Act 2010, passed last June by the Sindh Assembly. An advisory committee, appointed by the Karachi Building Control Authority and compose of architects and infrastructure personnel, opposed the Act.

Although high density refers to the number of people per square feet, high-density development is often shorthand for vertical development, or high-rises. The law gave the government permission to designate “high-density development” areas anywhere in Sindh. Architects and planners criticised the law for being vague and ignoring the problems that could result from indiscriminately placing commercial, highly trafficked buildings in residential areas.

Now lawmakers are attempting to clarify the Act with a set of rules and procedures which have not yet been voted into law. The rules would give the government permission to build anywhere in the city, with no height or size restrictions, no zoning boundaries and no sort of institutional approval process. Perhaps the government hopes to save time and avoid expensive bureaucracy. According to architect Husnain Lotia, a speaker and member of the advisory committee, President Zardari envisions Karachi as the next Dubai, with 100-storey buildings that would ignite the city’s depressed economy.

The SHEHRI speakers had different takes on the matter, but they all agreed that high-density development without long-term planning would further devastate the tense, chaotic sprawl that is contemporary Karachi.

“It’s better to develop vertically than horizontally. It’s less of a strain on resources than low density,” said Lotia. “So fine, build high-rises. But have a supreme authority, a board that represents all the stakeholders of the city.” He recommends that architects, engineers and organisations such as the Karachi Chamber of Commerce and Industry, the Sindh Environmental Protection Agency and Karachi Transportation Ittehaad be incorporated, echoing the committee’s original proposal.

“The architects did a good job of making a report, but it did not suit the government, so they removed all the checks and balances,” said Nooruddin Ahmed, an engineer. “And if we play fast and loose with an individual plot versus playing fast and loose with an 80-storey building, that’s a very different thing.”

The sewage lines, utility infrastructure and narrow streets in residential areas aren’t designed to handle high-density occupancy, and there are other safety concerns, such as accessibility in a crisis, such as a fire. High-rises are internationally barred in the vicinity of airports and many of Karachi’s neighborhoods don’t have the amenities to service dense populations. These amenities include green spaces, parking lots, hospitals, schools and playgrounds.

In 100 years, from 1911 to 2011, the population of Karachi has ballooned from 0.1 million to 16.5 million, and deSouza estimates that up to 60% of Karachi lives in a slum. The high-rises will do nothing for those people who make up the majority of the population, he said. In his opinion, the city should focus not on development, but on stabilising population growth and consuming less resources.

“You can’t have this much of a dichotomy between your rich and poor. You have to improve the situation of your poor, you have to make Karachi a decent city for everyone, before you can set about making it a world-class city,” he clarified. “Otherwise, who’s going to use these high-rises, who’s going to occupy them? Are they really going to improve business?”

But Lotia thinks that high-density development is positive if handled in an organised manner. “If it’s done correctly, we can develop a central city core, revitalise traditional centres and historic districts and bring places of work, living, entertainment and commerce together in one zone,” he said.

Najeeb Haroon, an engineer, agreed. “We need to create a skyline for this city. It’s missing that. But if the government doesn’t involve the right stakeholders, we’ll create a bigger urban jungle. The achievers, the educated ones, we are responsible for allowing this decay. We need to come together to turn things around. And we need an oversight committee that can’t be bought,” he said.

On Siemen’s Asian Green City Index, Karachi was the only city that scored “well below average” overall, when considering factors such as water and air pollution, land use, building efficiency and environmental governance. This is ironic considering that when Pakistan was formed in 1947, Karachi was considered the cleanest city in the subcontinent.

“Till 1967, Karachi had an excellent planning department and plenty of support from the World Bank. But by the mid-1970s, greed and exploitation had become planning imperatives,” said deSouza, echoing the sentiment of the seminar. Speakers and audience alike seemed to think that the High Density Development Act had the potential to make a few Karachi’ites a lot of money in the short term, but that its long-term implications would further fracture the social and physical infrastructure of the city.

Barrister Naim ur Rahman said the meeting wasn’t going to change anything. He thinks the High Density Act can be challenged under Articles 23 and 24 of the Constitution, since, “it takes away things that the people are already enjoying.” But, “it doesn’t matter – the people in power don’t abide by the law. Only if you make a nuisance of yourself will they react. You can use this meeting to clarify your thinking, but you must become much more aggressive.”