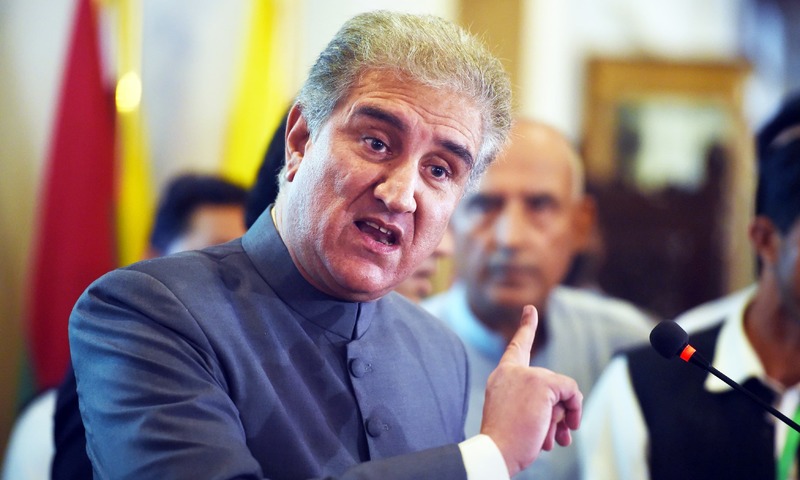 MULTAN: Foreign Minister Shah Mehmood Qureshi on Saturday said election in India was an internal matter of the neighbouring country and Islamabad would try to hold talks with the new government if it wanted to work with Pakistan.

Talking to the media, he said that Pakistan had neither interfered in its internal matters with any other country nor it intended to do so. “Although, issues are emerging in India but Pakistan has no role in that,” he added.

He said that he had spoken with Kashmiri leader Mirwaiz Umar Farooq and India should not make it an issue. “We want to resolve the Kashmir dispute through dialogue but India is making undue hue and cry,” he said.

Qureshi said the Kashmir dispute needed to be resolved, adding that Pakistan, India and the Kashmiri people were the three parties to the dispute. He told reporters that he would highlight Pakistan’s view point on Kashmir issue at an event in the House of Common in London this week.

The foreign minister maintained that Pakistan’s relations with many countries had improved because of successful diplomacy of the incumbent government. He said Saudi crown prince would visit Pakistan this month. “New agreements will be signed during his visit,” Qureshi stated.

He said relationships with Qatar, the United Arab Emirates (UAE) and several other countries had improved. He added that he recently visited Oman and the ties with it were also heading towards new heights.

“There could be a threat to the personal interests of some individuals,” he said, adding that the Pakistan Tehreek-e-Insaf (PTI) government had immense respect for the constitutional rights of the provinces.

About a deal between the opposition parties – Pakistan Muslim League-Nawaz (PML-N) and the Pakistan Peoples Party (PPP), Qureshi stated the PTI had not made any deal with Shehbaz Sharif. However, the PML-N and PPP were uniting.

He stressed that the National Accountability Bureau (NAB) cases against the PPP and the PML-N leaders were not made during the PTI government but were instituted by these two parties against each other.

He said the federal government would not make any effort to dislodge Sindh government. “The real threat to the Sindh government is not from the PTI but from its poor governance and corruption,” he said. He also said that the PML-Quaid had no reservations against the PTI.