Yemen's abandoned churches, remnants of a fading past

Yemen's abandoned churches, remnants of a fading past

In Aden, a church has been target­ed by arsoni­sts and closed for the forese­eable future­
By AFP
Published: February 2, 2019
Tweet Email 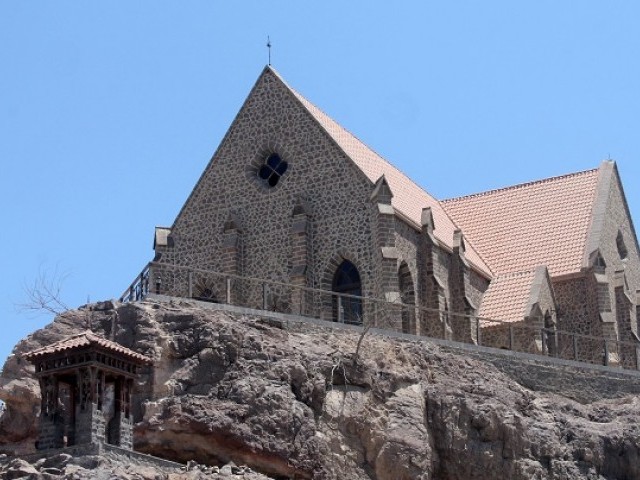 In this file photo taken on March 22, 2015 A picture taken on March 22, 2015, shows a view of St Mary's Garrison church, atop a hill, in the Crater district in the southern Yemeni city of Aden. - Hodeida, Aden, Sanaa, Taiz: Four Yemeni cities home to millennia-old civilizations, synonymous today with the suffering of war, and within which lie abandoned testaments to a rich, fading history: minority churches. PHOTO: AFP

ADEN: Vandalised, caught in the crossfire, burnt to the ground: Yemen’s churches, once filled by small but diverse Christian communities, are now abandoned after years of devastating conflict.

As Pope Francis prepares to make his first trip to the Gulf, neighbouring Yemen — in the grip of a conflict that has triggered what the UN calls the world’s worst humanitarian crisis — is losing the last remnants of the cultural diversity that marked its rich history.

Today, four official parishes in Yemen are listed by the Catholic Church, and officials say the country is still home to a handful of Christians who mostly live in hiding as religious conservatives on all sides grow stronger.

Sanaa, the rebel-held capital, and Aden, the bastion of the rival government, are each home to a Catholic cathedral — or what was once a cathedral.

In the southern port city of Aden, the church has been targeted by arsonists, vandalised and closed for the foreseeable future. The metal gates surrounding the St Francis of Assisi church in the Tawahi neighbourhood of Aden are locked, riddled with bullet holes, rusting.

Scrawled on the church wall, in black spray paint, are the words ‘No entry’ and “To you your religion, and to me mine”, a reference to a Quranic verse.

Atop the church is a statue of Jesus, arms outstretched. The statue has no head.

“This was a practising church from the days of the British (protectorate), and even before, for 140, 150 years,” said Mohammed Seif, a longtime resident of Tawahi.

“People were praying in here until the war of the Houthis,” he added, referring to the March 2015 rebel takeover of Aden. The pro-government alliance, led by Saudi Arabia and the United Arab Emirates, drove them out months later.

“It’s stopped ever since. The church has been vandalised, robbed,” Seif added, before trailing off.

In 2015, assailants blew up a church — already abandoned — in the Mualla district of Aden. The attack was never officially claimed.

In 2016, 16 people were shot dead in a Catholic retirement home in Aden, including four nuns of the Missionaries of Charity, the congregation founded by Mother Teresa of Calcutta.

Father Tom Uzhunnalil, an Indian priest, was also taken hostage before being released the following year.

Christianity is believed to have arrived in southern Yemen in the 19th century, as missionaries — mainly but not exclusively from Britain — found their way to what was then a British protectorate.

The Catholics arrived around 1880, according to Father Lennie Connully of the Apostolic Vicariate of Southern Arabia.
With the 1967 revolution of southern Yemen — then Marxist — against the British, the priests fled to Bahrain and the UAE.

“It all started in Yemen, therefore Yemen is very important to us,” Connully, who heads the parish at St Mary’s Catholic Church in Dubai, told AFP.

Yemen’s minuscule Catholic community is mostly made up of foreigners, according to Bishop Paul Hinder, head of the Apostolic Vicariate of Southern Arabia.

“It is unfortunately a sad reality and we pray that peace be soon restored in Yemen, especially as people suffer from hunger and the famine is affecting millions of people,” Hinder told AFP.

“Our services are at present suspended because of the war. But there are still nuns, the Sisters of Mother Teresa of Calcutta that have been serving the people for several decades and continue their good work.”

The remaining two Catholic parishes in Yemen are located in the two main frontlines in the war today: the Red Sea city of Hodeida, home to the country’s most valuable port, and southwestern Taiz, controlled by the government and surrounded by rebels.

Hodeida was for months the main front line in the Yemen war after government forces supported by Saudi Arabia and its allies launched an offensive to capture it in June.

While both the rebels and government alliance have agreed to a ceasefire, the truce is shaky at best.

The Sacred Heart Church of Hodeida is hidden from view, the ground floor of a nondescript three-storey building with shuttered white windows.

Issam, who requested his name be changed, has lived in the neighbourhood for 20 years. He says he has never heard prayer coming from the ground floor, which has been vacant for years.
While residents of Hodeida interviewed by AFP had little knowledge of the hidden church, many had a message for Pope Francis.

“I just hope he sees the pictures of the victims and understands what life is like for Yemenis,” said Rima, 28.

“I hope he prays for us. No one wants to end this war.”