In a ceremo­ny in the US state of Califo­rnia
By AFP
Published: February 1, 2019
Tweet Email 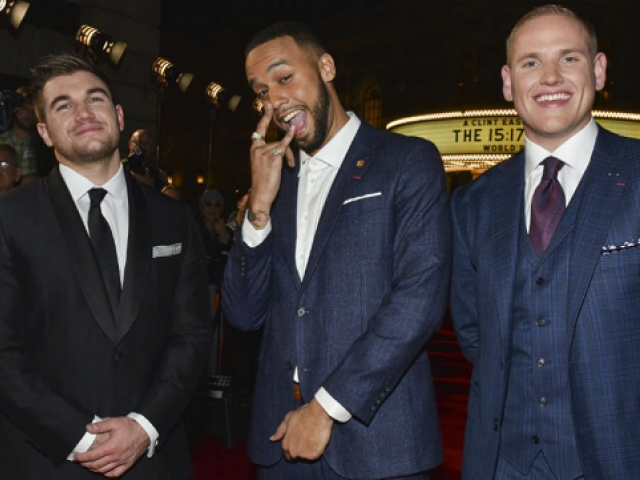 (L-R) Alek Skarlatos, Anthony Sadler and Spencer Stone arrive at the premiere of "The 15:17 to Paris" at Warner Bros. Studios on February 5 in Burbank, California. PHOTO: AFP

SACRAMENTO: Three Americans hailed as heroes for thwarting a militant attack on a train between Amsterdam and Paris were officially welcomed as French citizens on Thursday in a ceremony in the US state of California.

Anthony Sadler, Alek Skarlatos and Spencer Stone, all aged 26, “risked their lives for the values of the republic,” Emmanuel Lebrun-Damiens, the French consul general in San Francisco, said at the ceremony in Sacramento.

While on vacation in Europe, the trio took action on August 21, 2015 to prevent a bloodbath on the high-speed Thalys train, tackling a man who opened fire on travelers.

The gunman, identified as Moroccan national Ayoub El Khazzani, was armed with a Kalashnikov assault rifle, a pistol and a box cutter.

The attacker had seriously injured a person before the intervention of the three Americans, two of whom were in the military at the time: Skarlatos in the Oregon National Guard, and Stone in the Air Force.

The three young men received the Legion d’honneur, the highest French distinction, from then-president Francois Hollande, and became even more famous after the incident was made into a Clint Eastwood movie in which the three played themselves.

The three were naturalized at their request.

“It was important for us to become citizens because we have such a connection with France now. We’ve been back four or five times since the terrorist attack,” Skarlatos said.

“Today, France is proud and happy to welcome you,” French President Emmanuel Macron wrote in his official letter of naturalization.

“You now have the full rights attached to French and European citizenship and must fully assume all the duties. Our republic and the European Union need your active participation to support democracy,” Macron added.

“We don’t speak French yet but we’re currently about to get into classes,” Sadler said.

“It opens up a lot of different options in my life,” said Stone. “Maybe I’ll have a French wife!”

In pictures: US polar vortex nears end, blamed for 21 deaths