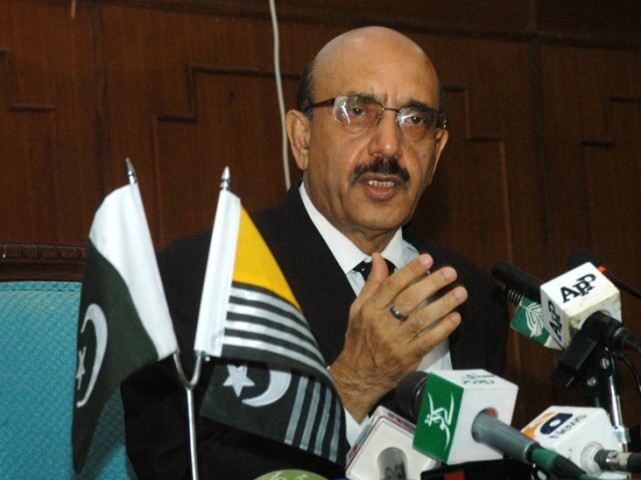 MIRPUR: Azad Jammu and Kashmir (AJK) President Sardar Masood Khan on Thursday condemned the confiscation of passport and travel documents of Mirwaiz Umar Farooq and other Hurriyat leaders by the Indian authorities, preventing them from attending a Kashmir event at the House of Commons in London.

In a statement, President Khan said that such manoeuvres could not dampen the spirit of the Kashmiri people and their leadership in their struggle for attaining their right to self-determination.

He lamented Indian government’s approach of suppressing the voice of Kashmiri people by using brute force, restricting their movement and illegally incarcerating innocent political leaders in jails all over India.

“India is under the impression that by killing, maiming and arresting unarmed Kashmiris, they will be able to quash the freedom movement in occupied Kashmir,” the president said, paying rich tribute to the resistance leadership.

He praised the Kashmiri people for their staunch stance in the face of occupation forces, who used their military might against innocent protesters. The Indian forces, he said, were enjoying absolute immunity under draconian laws and freely arresting, blinding and killing innocent Kashmiris.

Masood said that under the guise of security operations, Indian occupation forces arrested Kashmiris and kept them in jails without charges. He demanded that Yasin Malik, Syed Shabbir Shah, Aassiya Andarabi and hundreds of other Kashmiris be freed from illegal imprisonment.

He condemned the recent arrest of numerous Kashmiris during ‘cordon and search operations’ in Baramulla and areas in and around Srinagar. He urged the international community, media and civil society to raise their voice over the grave human rights violations in Indian occupied Kashmir.

“The global community must influence India towards halting the use of force against the people of Kashmir and allowing them to freely exercise their right to self-determination.” The president urged people from all walks of life to enthusiastically raise the Kashmir issue on the upcoming Solidarity Day on February 5.