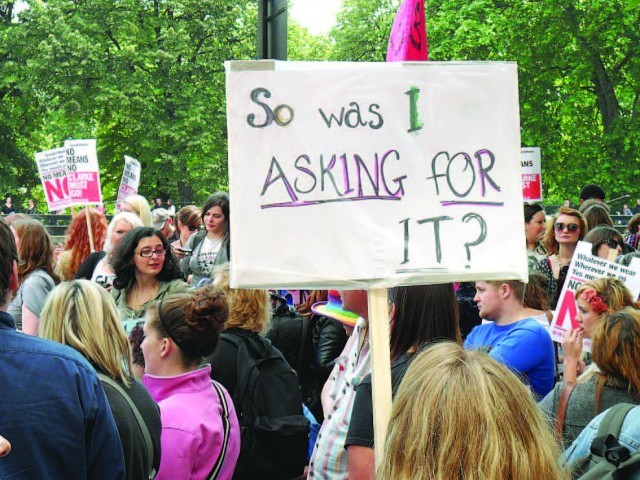 Onlookers looked bewildered and amused as thousands ‘slutwalked’ from London’s Hyde Park Corner to Trafalgar Square last Saturday. Some laughed and cheered as the enthusiastic and at times outrageously dressed crowd sang, danced and chanted its way through central London streets.

“However we dress, wherever we go, yes means yes and no means no!” This popular slogan summed up the idea behind the ‘slutwalk’ phenomenon, which started in response to a Toronto policeman’s comment in January that women should try not to dress like ‘sluts’ to avoid being victimised and raped. Outrage at this ‘advice’ sparked the first Slutwalk in Toronto in April and the phenomenon has since gone global, with Slutwalks across the USA and Australia, in some European and South American countries and one planned in New Delhi on June 25.

The outrage is primarily against a culture in which women are often blamed for sexual violence where they are the victims. A group of young women had come to London from Brighton for the march. “It’s important to get the message out that when a woman gets raped or attacked, it’s never her fault” says Rebecca Allinson, “it doesn’t matter what she was wearing, or whether she was drunk or out late — it’s always the rapist’s fault”. The website for Slutwalk London declares its stand for ‘the radical notion that no-one deserves to be raped’.

Although the term ‘slut’ was originally used to describe dirty, slovenly women its meaning changed in the 19th and early 20th centuries to become a derogatory term for a woman of loose sexual character. The word is said to embody society’s double standards as no analogous term exists for promiscuous men who may instead be referred to admiringly as ‘studs’ or ‘ladies men’.

One controversial aspect of the Slutwalk movement is its avowed aim to ‘reclaim’ the word slut. As in marches elsewhere in the world, many in London (including a few men) came dressed in revealing ‘slutty’ clothes: bras, corsets, fishnet tights and high heels, pink/red/purple wigs and so on. “This little black dress does not mean yes,” was the placard one woman carried. Slogans declared that all women were ‘sluts’ and an older protester wore a placard declaring herself to be a ‘pensioner slut’.  But what does it mean to ‘reclaim’ a term which one commentator described as being ‘saturated with the ideology that female sexual energy deserves punishment’?

The website is not very illuminating on this aspect: “Slut means speak up” it declares. Susan Warren from South London explained what it meant to her: “What we’re trying to say is, if one woman is a slut then we’re all sluts,” she says. Supporters of Slutwalk argue that calling all women sluts will take the sting out of the word and remove society’s division of women into good/bad, virgins/whores.

But many women including some who took part in the march are not too happy with the idea of re-appropriating a term they would rather see eliminated from popular vocabulary. Julie Long is part of the London Feminist Network that organises marches against violence against women called ‘Reclaim the Night’. These started a few years ago with 50 women and grew last year to a 2,000 strong demonstration. “I totally support why women are marching today,” she says, “but I am not interested in reclaiming the word slut.”

Newspaper columns and the blogosphere have been replete with criticisms of the Slutwalk movement. It has been accused of being naïve, white, middle class and confused. Writing in The Independent Yasmin Alibahi Brown writes: “Does it make any sense for us to teach our daughters that they can get pissed and wear whorish garb and still expect to be completely safe?”

In The Guardian, two teachers who have travelled around the country speaking about sexual violence to teenagers write: “We hear stories from women students who feel intense pressure to be sexually available “on demand”…They have been told over and over that in order to be valued in such a culture, they must look and act like sluts”.

Despite all criticism, there can be no doubt that the Slutwalk phenomenon has struck a nerve amongst thousands of women across the world who understand it broadly as being a protest against male definitions of modesty and the categorisation of women in terms of their sexuality. Its label, though controversial, has been marketing genius, attracting media attention and debate that initiatives such as ‘Reclaim the Night’ can never hope to get.

As the sun shone on the sea of mostly young enthusiastic people who had gathered that Saturday afternoon I remarked to a group of young women from the LSE how women from my generation had thought no-one was interested in feminism anymore. “Well I’m just 25 years old,” said one, “and I don’t know about the past. But as you can see feminism is alive and well.”

The taming of the screw