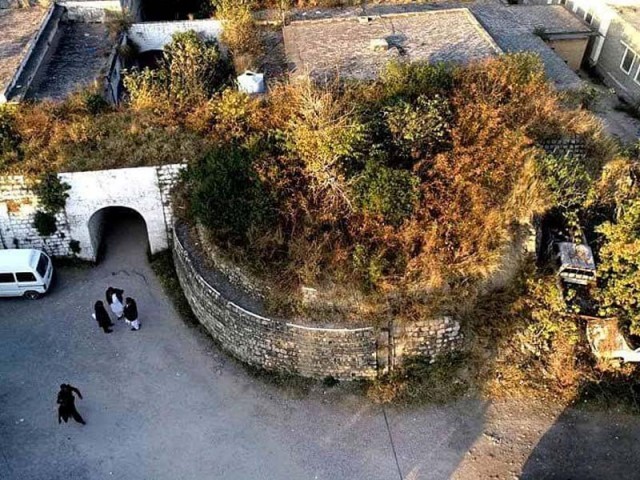 HARIPUR: Hope for the survival of 200-year old Harkishan Garh Fort has been rekindled after Chief Minister Mahmood Khan gave approval for converting it into a museum.

CM Mahmood has approved the summary sent by the Directorate of Archaeology and Museums (DOAM) to turn it into a museum, officials said.

The CM has also ordered reinstating the historic importance of the fort built by Sikh General Hari Singh Nalwa in 1821 in Haripur’s Harkishan Garh area. The DOAM will take over the fort from the district administration and convert it into a museum.

The Haripur area is also named after General Hari Singh Nalwa. The civil administration was planning to demolish the relic of almost 200 years Sikh rule in Punjab and present day K-P and build a modern structure in its place for housing the accounts department.

The 16-meter high and four meter thick fortification around the fort spread over 70 kanals were destined to be raised.

The district authorities had demolished part of the structure, now in city limits and prime real estate, but were stopped by three advocates of Haripur who had raised their voices against the illegal occupation of a national heritage site.

Alarmed over expected loss of a heritage site, Haripur District Bar President Malik Asadullah Advocat, Jawad Habib Advocate and Zakir Hussain Tanoli Advocate challenged the permanent encroachment on land and its occupation and became a party against it on which court issued a stay order.

They told The Express Tribune that initially they got stay orders against the razing of fort from a local court. They met Haripur Deputy Commissioner Zahid Pervaiz Warraich and explained the historic importance of the fort pressing that it should be converted into a museum so that people can know of the historical importance of this fort. They said that they were in touch DOAM which supported their initiative through and through.

The trio said that their voice reached K-P chief minister, chief secretary and provincial ministers who barred deputy commissioner from demolishing this fort.

On contacting, DC Warraich said that a letter has been written to DOAM director to restore the fort in its actual shape and to preserve it and convert it into a museum.

Now it has been decided to transfer the complex built within the fort outside.

Tourism Corporation of K-P General Manager Muhammad Ali Syed told The Express Tribune that the fort was indeed a monument of historic importance which cannot be ignored.

Unfortunately, besides demolishing parts of this fort some permanent construction was also done on it. “We are looking over this matter. The preservation of national heritage is also the responsibility of locals we are in contact with other departments soon with converting it into a museum we will decide strategy for further work.”

The three lawyers who had struggled for preserving the fort succeeded in getting it taken over by the DOAM and converting iot into a museum where people from Pakistan and abroad and the Sikh community can come and visit to realise historic importance of almost 200 years of Sikh rule in Punjab and the areas now known as Khyber-Pakhtunkhwa.