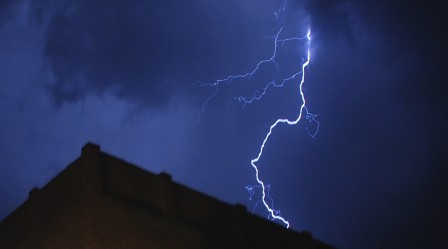 The monsoon season has officially arrived in Pakistan.

The initial effects of Cyclone Phet have left Karachi drenched Sunday morning, as reports of rainfall came in throughout the night.

The Meteorological Department has recorded 370 mm Rain in Gwadar, 208mm in Jiwani, 127mm in Pasni and 63mm recorded in Turbat during last 24 hours.

Earlier, the navy started evacuating residents to their units as sources claim that the effects of Cyclone Phet have left the local administration helpless on Saturday evening.

According to sources, five Navy platoons have been deployed to help those affected by the rains along the coastal belt.

Sources have also revealed that residents of dilapidated buildings in Clifton and Defence areas of Karachi are being evacuated.

Record breaking rains lashed the coastal areas of Balochistan as Cyclone Phet heads towards Karachi on Saturday. A bridge linking Sar bandr and Pushgan has washed away.

Director Met Office in Karachi Doctor Hanif has said that the cyclone is heading towards the city at a speed of 12 kilometers per hour.

The Gwadar DCO has declared emergency in the district. Traffic in the coastal areas of Balochistan has been suspended and so have air services.

Rain has also started in area of Zero point 2 in Jaati. Fishermen who have been residing in the area for the past 10 days are facing many problems.

Addressing a press conference on relief operations, he confirmed that the navy has set up aid camps in Gawadar, Pasni and Gewani. A relief convoy will also leave for the said areas Saturday night to distribute aid goods among the local population.

He revealed that two commands of the Pakistan Navy are active in Karachi to meet any eventuality. He added that 70 per cent of the population has been evacuated from costal areas in Sindh.