Global stockp­ile of around 250,000 tonnes of highly radioa­ctive spent fuel is distri­buted across some 14 countr­ies
By AFP
Published: January 30, 2019
Tweet Email 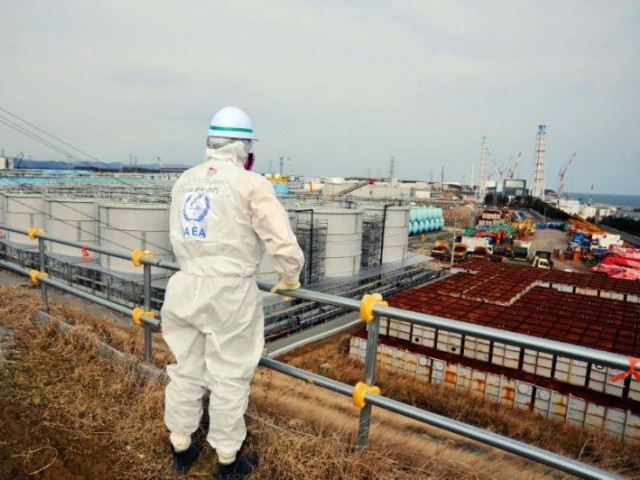 Global stockpile of around 250,000 tonnes of highly radioactive spent fuel distributed across some 14 countries. PHOTO: AFP

PARIS: Nuclear waste is piling up around the world even as countries struggle to dispose of spent fuel that will remain highly toxic for many thousands of years, Greenpeace detailed in a report on Wednesday.

An analysis of waste storage facilities in seven countries with nuclear power revealed that several were near saturation, the anti-nuclear NGO said.

All these nations also confronted other problems that have yet to be fully contained: fire risk, venting of radioactive gases, environmental contamination, failure of containers, terrorist attacks and escalating costs.

“More than 65 years after the start of the civil use of nuclear power, not a single country can claim that it has the solution to manage the most dangerous radioactive wastes,” Shaun Burnie, a nuclear expert at Greenpeace Germany and coordinator of the report said in a statement.

In particular, storing waste material from nuclear power reactors deep in the ground — the most researched long-term storage technology — “has shown major flaws which exclude it for now as a credible option,” he said.

Currently, there is a global stockpile of around 250,000 tonnes of highly radioactive spent fuel distributed across some 14 countries.

Most of this fuel remains in so-called “cooling pools” at reactor sites that lack secondary containment and remain vulnerable to a loss of cooling. Some lack a source of back-up power.

The partial meltdown of Japan’s Fukushima nuclear power plant in 2011 made clear that the high-heat hazard of spent fuel pools is not hypothetical.

The 100-page report, compiled by a panel of experts, dissected shortcomings in the management of voluminous waste in France, which has the second largest nuclear reactor fleet (58) after the United States (about 100).

“There is no credible solution for long-term safe disposal of nuclear waste in France,” the report said.

French oversight bodies have already raised concerns about capacity of massive cooling pools in Normandy at the La Hague site.

In response, energy giant Orana, which manages the site, said in a statement that “there is not risk of saturation of the pools in La Hague until 2030.”

In the United States, billions of dollars and decades of planning have failed to secure a geological disposal site, the report notes.

The Yucca Mountain underground facility — decades in construction —was finally cancelled in 2010 by the Obama administration.

Meanwhile, some 70 per cent of spent fuel in the United States remains in vulnerable cooling pools, often in densities several times the greater than originally intended.

The world’s inventory of uranium mill tailings — sandy waste material that can seep into the local environment — was estimated at more than two billion tonnes as of 2011.

The other countries covered in the report are Belgium, Japan, Sweden, Finland and Britain.