Talks would come just before the Februa­ry 2 expira­tion date of US Presid­ent's 60-day deadli­ne
By AFP
Published: January 30, 2019
Tweet Email 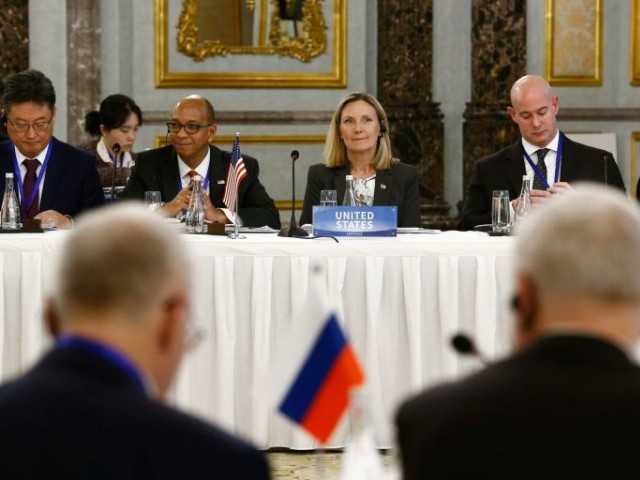 The talks come after months of raging tensions between Moscow and Washington over the fate of the INF treaty. PHOTO: AFP

BEIJING: The United States accused Russia and China of not fully reporting their nuclear programmes Wednesday and called for more transparency, amid US threats to withdraw from a key arms control treaty.

A senior US official made the remarks as the five permanent members of the UN Security Council — all of them nuclear-armed powers — met in Beijing for talks on nuclear disarmament and non-proliferation.

Andrea Thompson, US undersecretary for arms control and international security, said there were “uneven results” in efforts to advance transparency under the nuclear non-proliferation treaty.

“We previously agreed to set (a) format for reporting, but the gap between the reports of the United States on the one hand, and Russia and China on the other, is great,” Thompson said in her opening remarks.

“I cannot overemphasise the value of transparency,” she said.

Officials from Russia, China, France and Britain — countries under the Non-Proliferation of Nuclear Weapons (NPT) treaty — also attended the meeting, which will continue on Thursday.

Russia has also proposed holding a new round of talks with the US in Beijing on the Intermediate-Range Nuclear Forces treaty (INF) — a source of raging tensions between Moscow and Washington.

The talks, if conducted, would come just before the February 2 expiration date of US President Donald Trump’s 60-day deadline to start withdrawing from the INF treaty.

Signed in 1987 by then US president Ronald Reagan and Soviet leader Mikhail Gorbachev, the arms control agreement is now under threat, with Washington accusing Russia of violating the treaty.

Trump has promised to withdraw from the agreement, while President Vladimir Putin has threatened a new arms race, saying Europe would be its main victim.

Earlier this month, talks in Geneva between senior diplomats from both countries fell through as Washington and Moscow blamed each other for pushing the INF treaty to the brink of collapse.

Last week, Russia unveiled its missile system in a bid to reassure foreign officials that its weapons were in compliance with the arms control agreement.

But Washington has said the missile system should be destroyed in a verifiable manner if Moscow wants to keep the INF alive.

At Wednesday’s conference in Beijing, deputy Russian foreign minister Sergey Ryabkov pointed to “the spread of unilateral attitudes” as a threat to nuclear non-proliferation.

“Many issues continue to be unsettled due to the lack of political will,” he added, and said that there is an “evident lack of mutual trust” between the five NPT states.

“This (NPT) regime is being loosened, which is fraught with serious and negative impacts for nuclear non-proliferation,” he said.