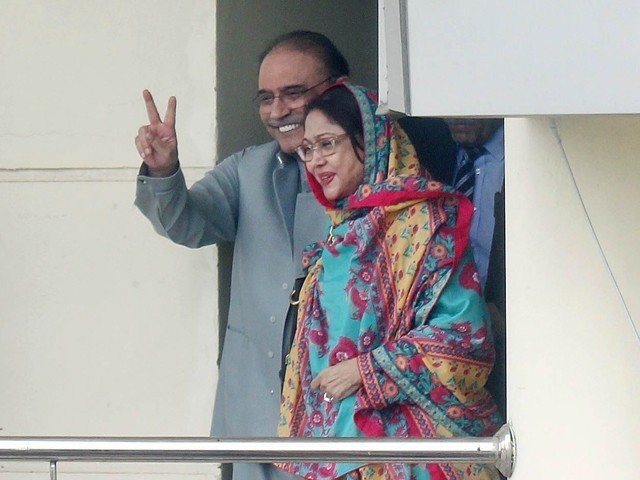 ISLAMABAD: Former president Asif Ali Zardari and sister Faryal Talpur on Monday submitted a petition in the Supreme Court (SC) to review and recall the January 7 decision in the money laundering case lodged against the PPP’s top leadership.

In the civil review petition prepared by the Latif Khosa, the former president and his sister have challenged the earlier decision by the apex court.

In light of the joint investigation team (JIT) report, the apex court had directed the National Accountability Bureau (NAB) to conduct a fresh investigation within two months and file references against the accused.

The petition stated that the “impugned order suffered from errors floating on the surface of the record”. It also argues that the directions issued in the SC order “are prejudicial to the petitioner in any futuristic eventualities of a fair trial and due process will not be possible under Article 10 (a) of the Constitution”.

“The powers under Article 184(3) of the Constitution are not unlimited, unfettered, completely discretionary, knowing no bounds,” reads the petition.

The review appeal further stated that the apex court’s decision “commits an error in holding that the constitution of the JIT is a valid exercise of jurisdiction in aid of a lawful object”.

“The facts and circumstances of the case and in light of the JIT report in this court was not justified vide impugned order in directing the transmission of the JIT report along with all the material and evidence collected by the JIT to the NAB”.

The petition further argues that the court was “not justified in passing any order at all giving directions to the NAB and JIT thereby curtailing rights of the petitioners and others”.

“That such binding dictates coming from the Supreme Court tantamount to obstructing the free flow of justice in the inquiry/ investigation of NAB and JIT and is contrary to the authoritatively mandated,” the petition said.

The petitioners also claim that the JIT had exceeded its mandate and scope given to it. It said the allegations against Talpur were unlawful since JIT was only mandated to probe Zardari Group. “The result of the overstepping by the JIT from the task assigned to it in order dated September 5, 2018 by the Hon’able Court was politically exploited in that 172 persons enmass were placed on ECL including chairman PPP Bilawal Bhutto Zardari and Murad Ali Shah.”

The petition said the inquiry “starting with limited number of fake accounts was stretched by the JIT into a roving inquiry and witch hunting crossing over into unfathomed waters”.

“The petitioners have been subjected to a derogatory campaign to stigmatise and malign them politically for unreservedly standing with the downtrodden voiceless weak segment of the society.”

Speaking to the media outside the SC, Khosa confirmed filing the review petition. “The matter pertains to a banking court. It does not fall under Article 184(3) of the Constitution. Since a challan has already been sent to the banking court, there is no need to refer the case to NAB.”

Reflecting on the apex court’s decision to take suo motu notice due to the slow progress in the case, Khosa stressed that there were thousands of cases pending in Pakistan’s courts. “If the SC’s intention was to expedite judicial proceedings, then there are many more cases that it needs to focus on.”

He said former interior minister Chaudhry Nisar had been particularly enthusiastic to launch the inquiry. “We have always expressed reservations on the formation of the JIT. Under which law are intelligence operatives included in the investigation team?”

In December 2015, the Federal Investigation Agency began a discreet investigation into certain bank accounts through which multi-billion rupee transactions have been made. According to FIA sources, information regarding the fake accounts came to the fore when an intelligence agency picked up a prominent money changer in an unrelated case.

As the monitoring and investigation of these suspicious accounts continued, it surfaced that five of these accounts in two banks – the Sindh Bank and Summit Bank – had been used for transactions worth around Rs15 billion.

Investigation showed the accounts were operated by fake companies. Funds were credited into these accounts from contractors with multi-billion rupee contracts with the Sindh government. The money was found to have been transferred to accounts of companies owned and operated by the Omni Group, whose chairperson, Anwar Majeed, is a close aide of Pakistan Peoples Party (PPP) co-chairperson Asif Ali Zardari. Another beneficiary was Nasir Lootah, the chairperson of Summit Bank.

The FIA submitted its report to the apex court on July 8 which revealed a web of companies and accounts that were being used to transfer billions of rupees.

In all, 29 accounts were identified that received payments, totaling at least Rs35 billion.

Read the full text of the JIT report here.