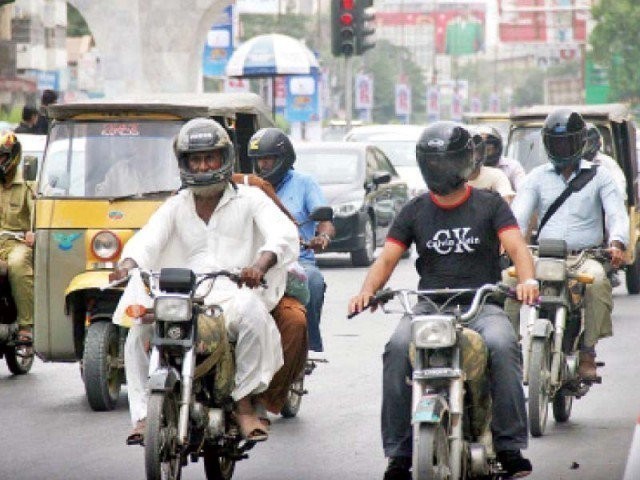 QUETTA  : The provincial government on Saturday started the Safe Citizens Project to prevent traffic accidents, while a Chief Minister’s Volunteer Cell (CMVC) has been established to monitor the scheme.

Kakar said on the occasion, “During a research by CM’s Media Cell it was revealed that the traffic police have been filing 380 challans a day on average, majority of which are against motorcycle riders. Therefore, the government has taken an initiative to provide helmets to students free of charge.”

He said that under the project the motorcycle riders would be provided information regarding safety measures while travelling.

The CMVC has informally commenced working with philanthropists and volunteers to set a strategy for the initiative.

Following increasing traffic accidents causing head injuries among motorcyclists, the government is going to spread awareness among citizens regarding importance of helmet, he said, expressing hope that the new project would be helpful in reducing traffic accidents in the provincial capital.

“The project will be monitored by the CMVC and run by voluntary workers,” the focal person said and added that the CM had provided the helmets from his own expenses and set a good precedent in Balochistan.

This is the second such scheme after the Safe City Project to improve conditions in the city.

On January 18, the government decided to launch the Safe City Project in all major and border cities of the province.

The decision came during a high-level meeting on the law and order situation, chaired by Chief Minister Kamal, where the home secretary, inspector general of police and Frontier Corps officials briefed the participants about efforts of law enforcement agencies (LEAs) for maintaining peace.

The meeting was told that implementation of the Quetta Safe City project had begun, while planning was under way to launch similar projects in all major cities of Balochistan, including those in border areas.

Moreover, the minister for home and tribal affairs during a visit to Pishin announced that the district would be linked with the Quetta Safe City project.

The government was utilising resources to protect the lives and property of the masses, he said. However, he added, “In order to discourage crime we have to move forward with a strong intelligence-based system.”