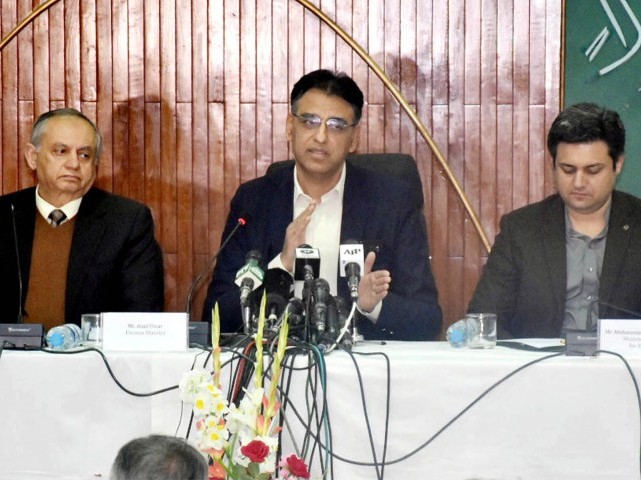 ISLAMABAD: The Pakistan Tehreek-e-Insaf (PTI) government on Thursday decided to bail out big defaulters by waiving 50% of their outstanding dues – or around Rs200 billion – on account of the Gas Infrastructure Development Cess (GIDC).

Addressing a press conference, Finance Minister Asad Umar said that the government would amend the law relating to the GIDC in this regard. He added that the cabinet had taken a decision to offer 50 per cent waiver on GIDC just as the compressed natural gas (CNG) sector availed this facility in the past.

Fertiliser, textile and CNG sectors are among the major defaulters, which had received more than Rs400 billion from consumers on account of GIDC but did not to pay to the government after obtaining stay orders from courts.

The cabinet on Thursday decided to bail out the three major defaulters by waving off 50% outstanding amounts to the tune of Rs200 billion. However, major losers in this decision would be the poor farmers who had paid Rs120 billion in GIDC to fertiliser industry.

The finance minister said that the cabinet also decided to reduce the GIDC rates for future. However, he added that those sectors would be able to avail the reduced rates who settle the disputed amounts. He said that reduced rate of GIDC would result in reducing the prices of urea by Rs200 per bag.

Both the CNG sector and textile industry are to pay Rs80 billion each. During a meeting in the finance ministry, the textile and the fertiliser industries had also demanded to be treated at par with the CNG sector by waiving off 50% outstanding amount.

The GIDC was imposed by the Pakistan Peoples’ Party (PPP) government on gas consumers, including fertiliser, captive and CNG to raise funds to execute gas pipeline projects like gas pipelines and the LNG project.

However, the levy become controversial when the Pakistan Muslim League-Nawaz (PML-N) government, instead of spending the amount on building pipeline projects, made it part of the budget. Later different sectors approached the court and obtained stay orders.

Speaking about the mini budget announced in the National Assembly on Wednesday, Umar dispelled the impression of Rs12 in new taxes. “No new tax had been imposed,” he said, but added that there had been an increase in the federal excise duty (FED).

The government’s expenditures, the minister said, were more than its receipts and the trade deficit was increasing when the PTI came into power. “There was a monthly deficit of $2 billion and external financing was required to bridge this gap,” he added.

“When we go to some country, opposition says that the visit has failed,” he said. But on the contrary, the minister continued, the government had received bailout packages from Saudi Arabia and the United Arab Emirates (UAE).

Criticising the PML-N government, the said the previous rulers passed on a government which required surgery. “Now, the PTI government has entered into the next phase of surgery,” he said, adding that second mini-budget was in line with party’s election manifesto.

About negotiations with the International Monetary Fund (IMF), the finance minsiter said that Pakistan was a sovereign country and it “did not need any dictation”. He pledged not to bow to anyone and said that the government would go to the IMF if it had some better conditionalities for Pakistan.

At the same press conference, Minister of State for Revenue Muhammad Hammad Azhar said that the government had reduced general sales tax (GST) from 17 to 2.5% due to oil prices hike that resulted in a revenue loss of around Rs40 billion.

When the prices came down, he continued, the government caped the GST at 17% and the remaining impact had been passed on to the consumers. He added that the previous government had been charging 52% GST from consumers. Similarly a Supreme Court freeze on GST on prepaid cards of telecom companies also cost Rs70 billion to the national exchequer.

He said that the government was working to integrate data and going to launch a pilot project in Islamabad to simplify tax returns filing procedure. “This [new] system will not require services of a chartered accountant to file tax returns.