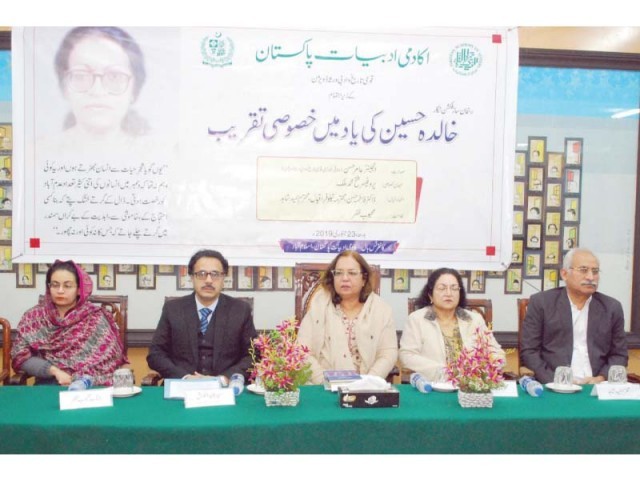 The ceremony was hosted by Mehboob Zafar. The video “Ahle Qalam SA Milyay” was also screened by the academy at the ceremony.

Dr Hassan said that an entire generation was inspired by Khalida Hussain’s stories in the 1970s. She molded fiction into the modern era in an appropriate manner. Khalida Hussain’s creativity had such depth that hidden or underlying meanings can be read in her writings. Dr Hassan stated that Khalida Hussain is a prominent and important name in Urdu fiction.

Among the innovators, Khalida Hussain was a novelist who primarily wrote fiction, but through her work also managed to depict Pakistani society with remarkable creativity. She will remain alive through her writings among her fans, Dr Hassan added.

Pakistan Academy of Letters Chairman Syed Junaid Ikhlaq said that she was a unique writer, whose works of Urdu fiction will always be remembered. He described her novels and stories as being of a very high quality.

The Pakistan Academy of Letters also published a book related to the personality and art of Khalida Hussain. A programme was also held along with him in the academy’s ceremony of “Ahle Qalam SA Milyay.”

She fought the war of ideologies which mostly centered on resistance and identity. She was not a feminist but she highlighted the issues of women in her writings.

She used to write with the name of Khalida Asghar at one time. She made a unique name for herself which held a prominent place in the world of fiction.