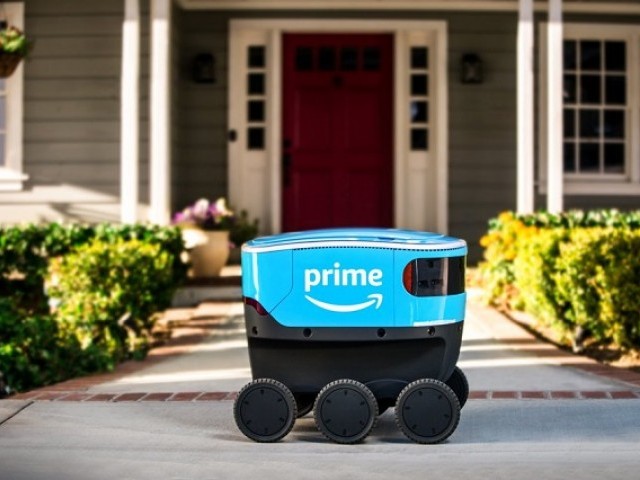 The company becomes the latest entry to the market for robotic or autonomous delivery. PHOTO: AFP

SAN FRANCISCO: Amazon on Wednesday began putting cooler-sized robots to work delivering packages to customers in a neighborhood outside Seattle.

Electric-powered, wheeled delivery vehicles named “Scout” were created by Amazon and guide themselves along sidewalks at a walking pace, according to Sean Scott, the vice president heading the project.

Amazon becomes the latest entry to the market for robotic or autonomous delivery aimed at getting meals or other goods to customers without a human driver.

“We developed Amazon Scout at our research and development lab in Seattle, ensuring the devices can safely and efficiently navigate around pets, pedestrians and anything else in their path,” Scott said in an online post introducing the delivery system.

He described Scout at being the size of a “small cooler,” and said that six of them were being used to deliver packages to Amazon customers in a neighborhood in a county near Seattle.

“Customers in Snohomish County order just as they normally would and their Amazon packages will be delivered either by one of our trusted partner carriers or by Amazon Scout,” Scott said.

Scout delivery robots will work only during daylight hours Mondays through Fridays, automatically maneuvering to destinations but accompanied by Amazon employees, according to the company.

Results of the Scout experiment will determine whether the system is expanded.

Amazon has developed an extensive logistics network as it works to efficiently delivery goods to customers while controlling costs.

The Seattle-based online retailer and others have been working on ways to improve getting orders the “last mile” from warehouses or fulfillment centers to doorsteps.

Chinese retail giant JD.com uses delivery robots, as do a number of startups operating in the United States and Europe. Starship Technologies, based in Estonia, has tested operation in the US capital city of Washington, and another startup, KiwiBot, handles deliveries to US university students.