Trump vows not to 'cave' on 32nd day of government shutdown

Trump vows not to 'cave' on 32nd day of government shutdown

The Senate is set to vote on two bills this week that would in theory break the deadlo­ck
By AFP
Published: January 23, 2019
Tweet Email 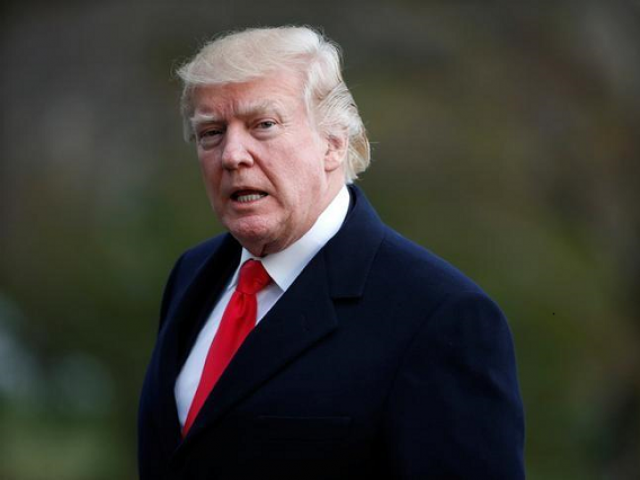 The Senate is set to vote on two bills this week that would in theory break the deadlock. PHOTO: REUTERS

WASHINGTON DC: President Donald Trump had a message Tuesday for Democrats hoping he’ll relent in the political arm wrestling that has seen funds blocked to parts of the government for a record 32 days: “No Cave!”

Trump’s defiant tweet again blamed congressional Democrats for the chaos, insisting he will not lift his shutdown on federal government funding unless they approve his $5.7 billion plan for more walls along the US-Mexican border.

Without a Wall our Country can never have Border or National Security. With a powerful Wall or Steel Barrier, Crime Rates (and Drugs) will go substantially down all over the U.S. The Dems know this but want to play political games. Must finally be done correctly. No Cave!

Never seen @senatemajldr and Republicans so united on an issue as they are on the Humanitarian Crisis & Security on our Southern Border. If we create a Wall or Barrier which prevents Criminals and Drugs from flowing into our Country, Crime will go down by record numbers!

“Without a Wall our Country can never have Border or National Security. With a powerful Wall or Steel Barrier, Crime Rates (and Drugs) will go substantially down all over the US,” Trump tweeted.
“The Dems know this but want to play political games.”

“The Democrats are playing politics with Border Security.” @foxandfriends

Trump triggered a partial government shutdown on December 22 — refusing to sign off on funding everything from FBI salaries to the National Park Service — as a way of pressuring the Democratic majority in the House of Representatives to back the wall project.

But with Democrats refusing to give in and Trump sticking to his hardball tactics, political paralysis in Washington has morphed into growing day-to-day pain across the country as some 800,000 federal employees adjust to life without salaries.

Trump’s main opponent, House Speaker Nancy Pelosi, was adamant that the president is to blame. “#EndTheShutdown now,” she tweeted.
Pelosi, speaker of the Democrat-led House, argues that border security funding cannot even be discussed before the shutdown ends, accusing Trump of “holding Americans hostage.”

The Senate is set to vote on two bills this week that would in theory break the deadlock, even if both have little chance of passing.
The first is on Trump’s compromise offer made Saturday, when he told Democrats he would extend temporary protection to about a million immigrants currently risking deportation if he gets his wall funding.

Pelosi sent out a rejection before Trump had even officially laid out his proposal. The president also caught backlash from the right wing of his own party, which accused him of wanting to give amnesty to large numbers of people living in the country illegally.

Republican Senate Majority Leader Mitch McConnell announced that a vote on Trump’s plan would take place this week, saying the chance to end the shutdown is “staring us in the face.”

However, the bill looks doomed, with the senior Democrat in the Senate, Chuck Schumer, describing the Trump offer as “going nowhere fast.”

“President Trump and leader McConnell need to come to their senses,” he said.

The Senate was also expected to reject a second, Democrat-backed bill to restart funding for the government. Even if it did get through Congress, “the president won’t sign it,” a senior Senate Republican aide said.

Both votes are expected Thursday.

With no deal, US government shutdown likely to drag on past Christmas

Extending the existing border fences has been at the top of Trump’s domestic agenda since his 2016 campaign.

Democrats accuse his campaign against illegal immigration of ignoring more complex humanitarian issues on the border and stoking xenophobia.

But the disagreement over walls has expanded into a much broader test of political strength in divided Washington, with each side desperate to prevent the other from declaring victory.

Meanwhile, the hundreds of thousands of unpaid federal employees and many more contract workers are collateral victims, facing the start of a second month of going unpaid.

Full-time employees will get their back pay eventually, but in the meantime they still have to meet mortgage payments and other monthly costs. Contractors, however, won’t receive the lost payments.

“Right now, this shutdown is really destroying me and my family,” added the single mother of two. “I’m the mother and the father in my household, and my children depend on me.”

Venezuela accuses US of ordering coup, seeks ‘revision’ of ties