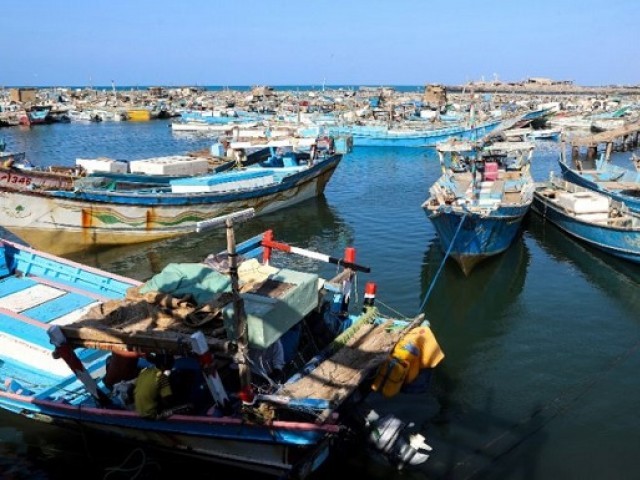 Yemen's Houthi rebels control the port of Hodeida, the main entry point for imports and other supplies to the country. PHOTO: AFP

UNITED NATIONS, UNITED STATES: Fuel loaded from ports in Iran has generated revenue to finance the Yemen Houthi rebel war effort against the Saudi-backed government, according to a report by a UN panel of experts seen by AFP.

The findings are expected to again raise questions about Iran’s support for the Houthis in the war that has pushed Yemen to the brink of humanitarian catastrophe.

In its final report for 2018, the panel said it had “identified a small number of companies, both within Yemen and outside, which operated as front companies,” using fake documents to conceal fuel donations.

The fuel was “for the benefit of a listed individual” who is on a UN sanctions blacklist, it added.

“The revenue from the sale of this fuel was used to finance the Houthi war effort,” said the 85-page report sent to the Security Council.
The panel found that the “fuel was loaded from ports in the Islamic Republic of Iran under false documentation” to avoid UN inspections of the cargo, it added.

Saudi coalition halts refueling deal with US for Yemen war

The experts have in past reports pointed to a possible Iranian link to missiles fired by Houthi rebels at Saudi Arabia, after they traveled to Riyadh to examine weapons debris.

In a previous report, the experts said they were investigating monthly fuel donations from Iran valued at $30 million.

Iran has repeatedly denied that it is providing military support to the Houthis, who seized the capital Sanaa in 2014, prompting the Saudi-led coalition to intervene a year later to push back the rebels.

The Houthis control the city and key port of Hodeida, a main entry point for imports to Yemen that pro-government forces had planned to capture in a new offensive launched in June.

A ceasefire in Hodeida was agreed during UN-brokered talks last month in Sweden and UN monitors are on the ground to oversee a pullback of forces from the port.

“Throughout the reporting period of 2018, Yemen continued its slide toward humanitarian and economic catastrophe,” said the panel, which described the country as ‘deeply fractured’ with a broken economy.

The war in Yemen continues to appear unwinnable.

Government forces and the coalition have made ‘significant progress’ on the ground against the Houthis, but “the aim of restoring the authority of the government throughout Yemen is far from being realised,” said the report.

The panel reported on its investigations of five air strikes in Houthi-controlled areas, including the August 9 bombing of a bus carrying children and a shelling attack.

It found that the Saudi-led coalition was responsible in four cases, including the bus bombing that killed 43 people and wounded 63 others, the majority of whom were children.

The panel said the coalition was ‘likely responsible’ in another incident in April 2018 involving the bombing of a building in Hodeida that killed 14 civilians, including seven children.

The coalition has admitted mistakes were made in two cases and has acknowledged that legal procedures could be taken in the case of the bus bombing, but the panel said it was unaware of any prosecution by any state.