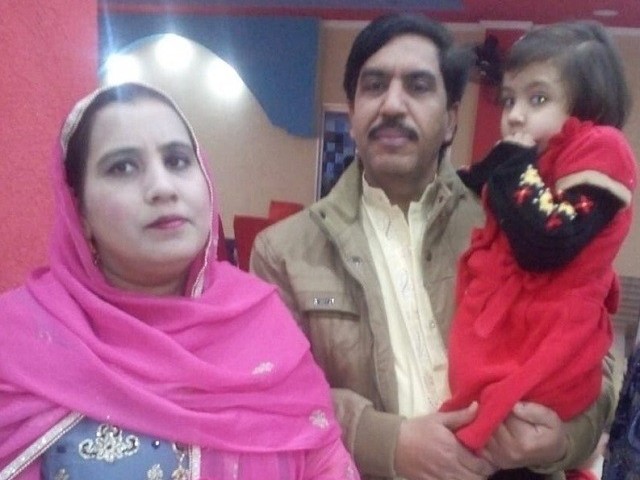 LAHORE: Four people – including two women – were killed in a shady encounter involving Punjab’s counterterrorism police on a highway in the Qadirabad area of Sahiwal district on Saturday noon.

The police first identified the victims as “kidnappers” and then as “terrorists of a proscribed group”, raising doubts over the “encounter”.

The Counter Terrorism Department (CTD) claimed in a statement that the law enforcers signalled a Suzuki Alto car and a motorcycle to stop near Sahiwal Toll Plaza on GT Road, but they did not pull over and instead opened fire. 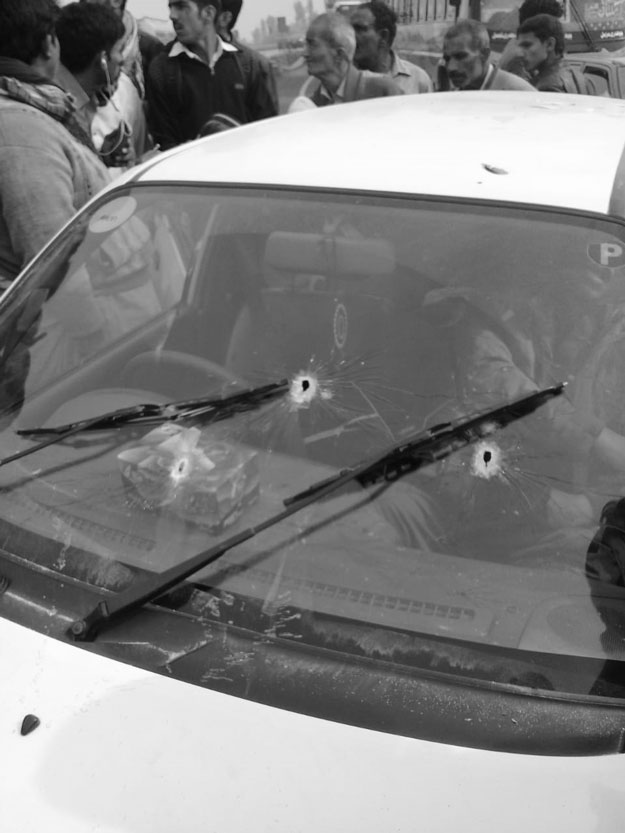 The police retaliated and four people, including two women, were killed by the “firing of their own accomplices” in the ensuing firefight by, according to the CTD.

The victims have been identified as Muhammad Khalil, his wife Nabeela, 13-year-old daughter Areeba and a neighbour.

Three children were also recovered from the “trunk of the car”. The children, who were shifted to the DHQ hospital, contradicted the CTD version, saying the fatalities included their parents, elder sister and a family friend named Zeeshan, and that they were travelling from Lahore to Burewala to attend a wedding.

“My papa pleaded before the police that there was no weapon in the car and that the police could search the vehicle,” one of the children, Muhammad Umar Khalil, said. “They didn’t listen to my papa and opened fire.”

TV channels reported Umar as saying: “My papa told the police officials to take their money and let them go, but they [police officials] did not listen and opened fire.”

The CTD claimed to have recovered “suicide jackets, hand grenades and a rifle from the scene”.

Eyewitnesses; however, endorsed the children’s version, saying that the CTD officials opened fire on the car without giving any kind of warning. They added that no weapons or explosives were recovered from them.

According to the CTD, the operation was a follow-up of the January 16 raid in Faisalabad and that they were tracing two wanted terrorists Shahid Jabbar and Abdur Rehman who were listed in the ‘red book’.

“The terrorists were asked to turn themselves in, but they opened fire. Shahid, Abdur Rehman and another unidentified terrorist fled on a motorcycle under the cover of fire. The police have mounted a manhunt for the fleeing terrorists and expanded the scope of the investigation.”

The CTD identified one of the victims of the Sahiwal “encounter” as Zeeshan and stated that Adeel Hafeez was killed in the Faisalabad raid. These terrorists were affiliated with the ultra-extremist Islamic State, also known by its Arabic acronym Da’ish, the CTD claimed in the statement. 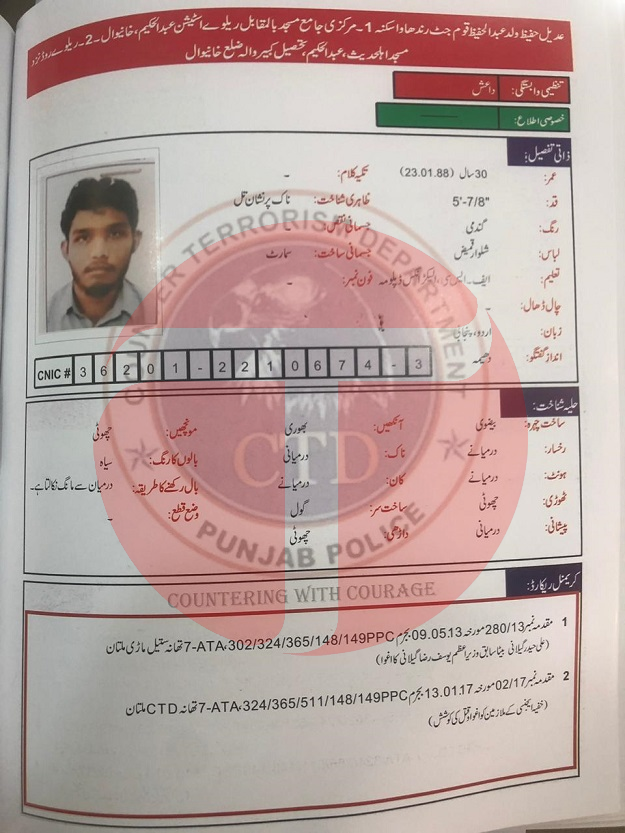 Moreover, the CTD alleged that these “most dangerous Da’ish terrorists” were also involved in the killing of dozens of innocent citizens.

Later, it transpired that the victim, Khalil, along with his family and a friend was travelling to Burewala to attend a family wedding. He was a resident of Chungi Amar Saddhu in Lahore, where he owned a shop.

Family, relatives and residents of the neighbourhood staged a protest near Chungi Amar Saddhu against the brutal killings. The protest led to huge traffic snarl-ups on several arteries of the city. 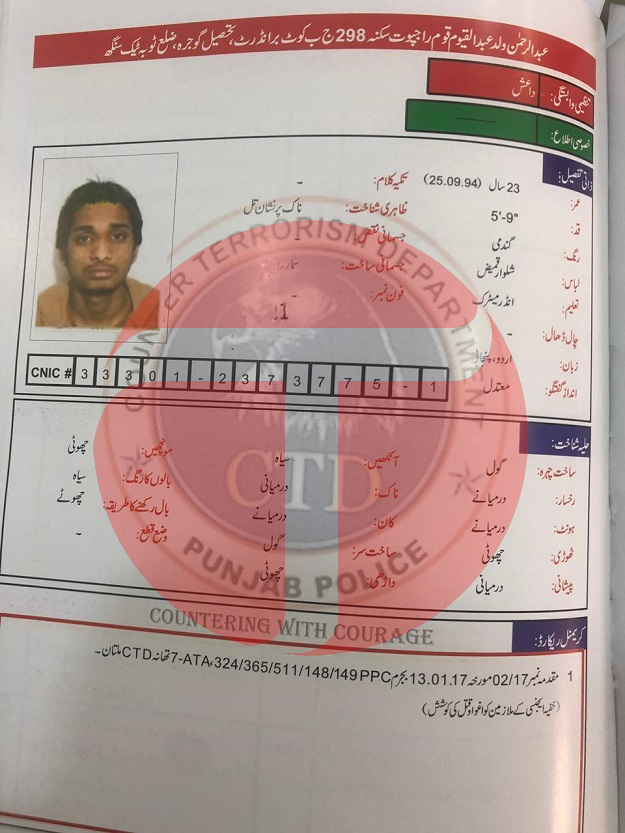 DIG Zulfiqar Hameed will head the JIT, which will also have representation from the Inter-Services Intelligence, Military Intelligence and Intelligence Bureau.

The JIT will submit its report with three days. 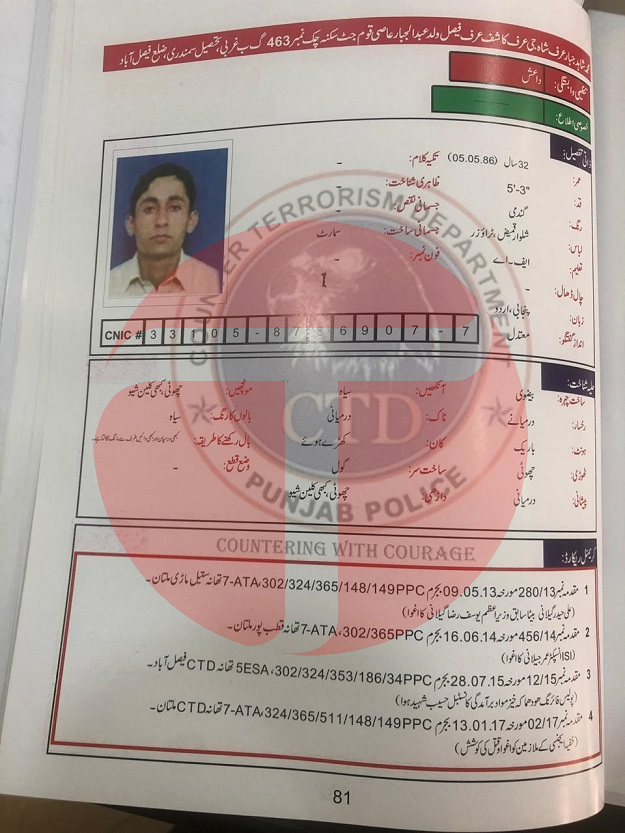 Taking notice of the issue, Punjab Chief Minister Usman Buzdar ordered the arrest of the CTD officials involved in the Sahiwal incident.

“The CTD officials involved in the alleged extra-judicial killing of a family have been taken into custody on the orders of the chief minister,” said Punjab CM’s spokesperson Dr Shahbaz Gill.

The Punjab CM rejected the CTD report on the Sahiwal tragedy in which the victims were labelled as terrorists.

Buzdar has sought a complete report of the incident from the Punjab inspector general of police.

He further said the PTI had never done politics on such types of tragic incidents and the responsible parties would face strict punishment. The victims belonged to his constituency and were all innocent, he added. 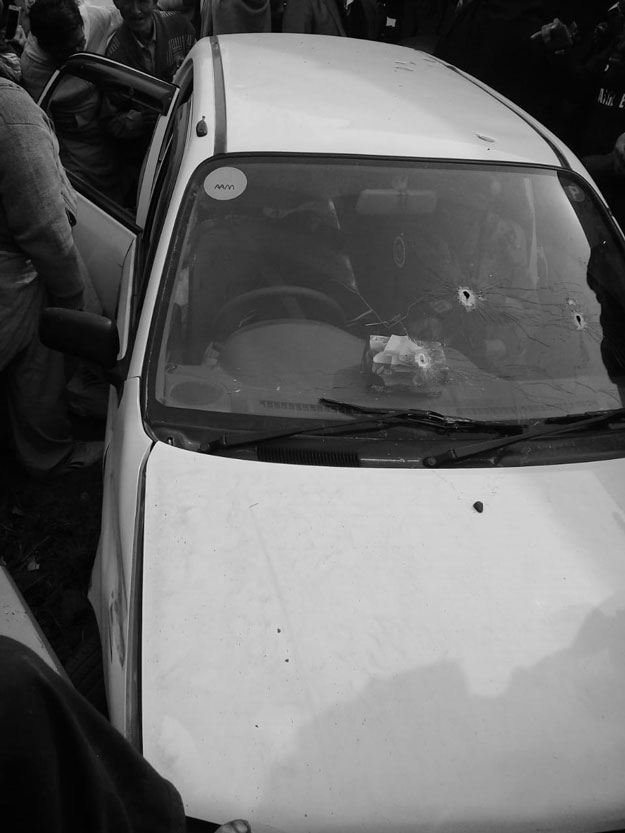 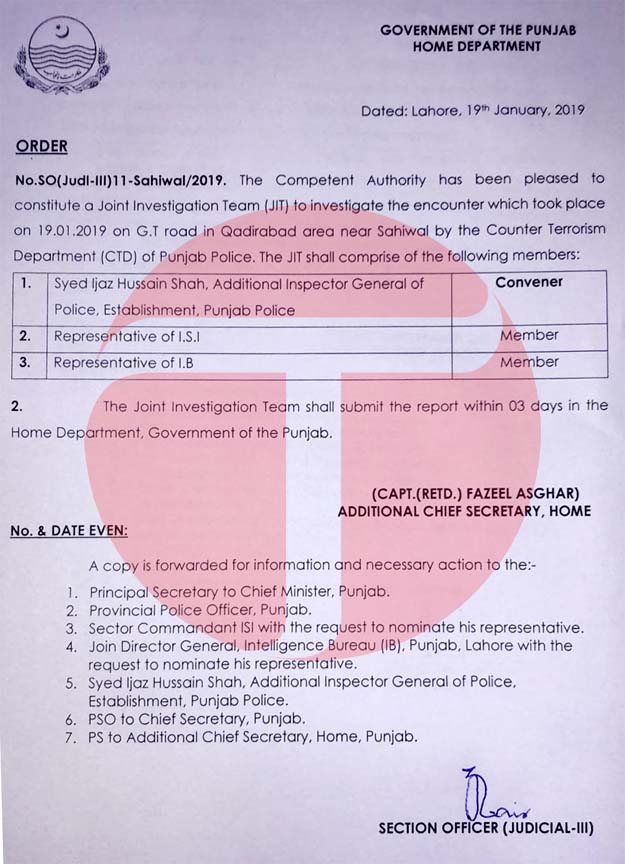 Govt not to accept any political arm-twisting, says Fawad