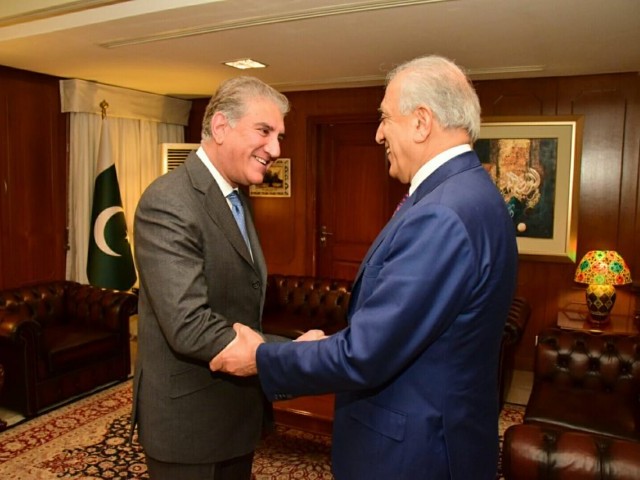 ISLAMABAD: Pakistan is likely to host the next round of Afghan peace talks, officials said on Friday, following meeting between the visiting US delegation led by President Trump’s point man Zalmay Khalilzad and Foreign Minister Shah Mehmood Qureshi.

Khalilzad, who is leading a high-powered delegation, is currently undertaking a visit to Islamabad as part of efforts to break the deadlock in talks with the Taliban. He also called on Prime Minister Imran Khan and briefed him on his visit to the regional countries on the Afghan peace process.

Last month, Khalilzad along with other American officials held direct talks with the Afghan Taliban representatives in Abu Dhabi. Talks were brokered by Pakistan and also attended by Saudi Arabia and UAE.

The second round was to take place in Saudi Arabia but the Taliban pulled out of the meeting over disagreement on the inclusion of Afghan government in the peace process. The group has refused to talk to the Kabul administration, insisting that they are “puppets”.

But Pakistan along with Saudi Arabia and the United Arab Emirates, has been pushing the Taliban to reconsider their stance and talk to the Afghan government. As the deadlock persists, Pakistan has now decided to host the next meeting in Islamabad.

Taliban would be formally invited for the meeting, according to the officials familiar with the development. The decision was taken following meeting between Khalilzad and Qureshi on Friday. Neither side, however, officially confirmed the development.

Nevertheless, the move is aimed at breaking the impasse as the Trump administration wants to conclude a peace deal with the insurgents before the next presidential elections in Afghanistan.

Pakistan as well as other stakeholders strongly believe that ultimately Afghan Taliban and the Kabul administration will have to sit across the table to decide the future of Afghanistan.

Pakistan arranged the meeting after Trump wrote a letter to Prime Minister seeking his help to facilitate the peace talks. The increased cooperation between Pakistan and the US shows a thaw in their otherwise frosty ties. Trump recently also expressed his desire to meet the new Pakistani leadership.

It is believed that the two sides have been discussing the possibility of arranging summit level talks between the two sides. But such a meeting hinges on the positive outcome of ongoing efforts to seek a political solution to the 17-year-long war in Afghanistan.