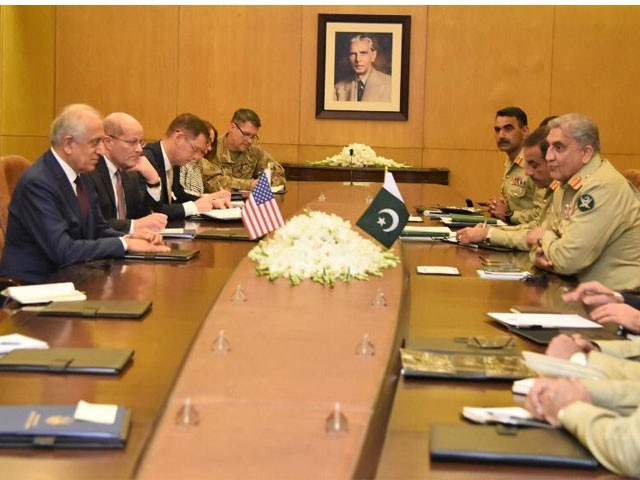 US delegation headed by Zalmay Khalilzad meets amry delegation at the GHQ in Rawalpindi. PHOTO: ISPR

Reiterating that peace in Afghanistan is important for Pakistan, army chief General Qamar Bajwa has assured US special envoy Zalmay Khalilzad of continued efforts for bringing peace in the region.

A US delegation headed by Khalilzad met the army chief at the GHQ, Rawalpindi to discuss Afghan peace and reconciliation, said a statement issued by the Inter-Services Public Relations (ISPR) on Thursday.

Earlier in the day, Khalilzad, who has been leading efforts to broker an agreement with the Afghan Taliban, met Foreign Secretary Tehmina Janjua at the Ministry of Foreign Affairs in Islamabad.

The two sides agreed that direct talks between the Afghan Taliban and the Afghan government were essential to end the 17-year-long conflict in the war-torn country.