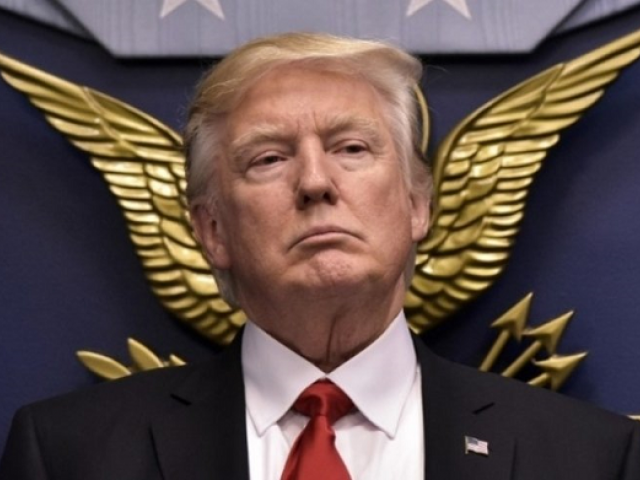 US President Donald Trump speaks following the ceremonial swearing-in of James Mattis as secretary of defense at the Pentagon in Washington, DC. PHOTO: AFP

WASHINGTON DC: President Donald Trump vowed on Thursday to boost America’s missile defence systems, including by investing in technology to protect against the threat of sophisticated “hypersonic” weapons.

Speaking at the Pentagon, Trump unveiled the Missile Defense Review, a long-awaited analysis of the defensive network of US interceptors that are designed to shoot down an incoming ballistic missile.

Top among the concerns highlighted in the review is the speed at which rivals, particularly China and Russia, are pushing ahead with hypersonic missiles, which can thwart traditional defence systems.

“The US will now adjust its posture to defend against any missile strikes including cruise and hypersonic missiles,” Trump told the military audience.

“We will terminate any missile launches from hostile powers or even from powers that make a mistake. It won’t happen, regardless of the missile type or geographic origins of the attack.”

Flying at low altitude, many times the speed of sound, and able to change direction, hypersonic weapons don’t follow a ballistic arc so are much harder to track and cannot currently be intercepted.

As a result, the Pentagon is urgently looking at ways to enhance its ability to track hypersonic missiles, primarily by using existing sensors that are deployed in space.

“These new technologies produce new threats, and these threats are harder to see, harder to track and harder to defeat,” Acting Defense Secretary Patrick Shanahan said.

“To our competitors: we see what you are doing and we are taking action.”

Trump blasted Iran for developing missile technology but notably, he did not mention North Korea, which has developed a ballistic missile arsenal and has conducted several nuclear tests.

Trump ordered the missile defence review in 2017, amid heightened tensions with Pyongyang over its nuclear program — the first such review of America’s ballistic defences since 2010.

But Trump has since met North Korean leader Kim Jong-Un in a bid to end the crisis, and he was expected to welcome a top North Korean official in Washington on Friday.

Still, the review itself stresses that North Korea is “an extraordinary threat and the United States must remain vigilant.”

The Missile Defense Agency (MDA), which conducted the review, said it would study the feasibility of creating a space-based interceptor system, in which an orbiting craft of some sort would be equipped with missiles that could destroy an incoming warhead while it was in space.

Another focus for the MDA will be developing ways to knock out a ballistic missile immediately after it has launched.

Currently, ground-based anti-missile technologies focus on intercepting warheads while they are in the “midcourse” phase, flying through space.

By attacking the missiles while they are still in their “boost phase” soon after launch, the MDA could add a layer of defence for America and its allies.

One way of doing this would be by adding a new type of missile to F-35 stealth fighters patrolling near a suspected launch site, such as in a hypothetical conflict with North Korea, the MDA said.

“Intercepting offensive missiles in their boost phase would increase the likelihood of successfully countering missile threats, complicate an aggressor’s attack calculus… and reduce the number of midcourse or terminal active defence interceptors needed to destroy the adversary’s remaining offensive missiles,” the MDA said.

The MDA is also looking at ways of boosting its “directed energy” — or laser — capabilities to take out ballistic missiles.

The review was due to be released last year, but its publication saw repeated delays.