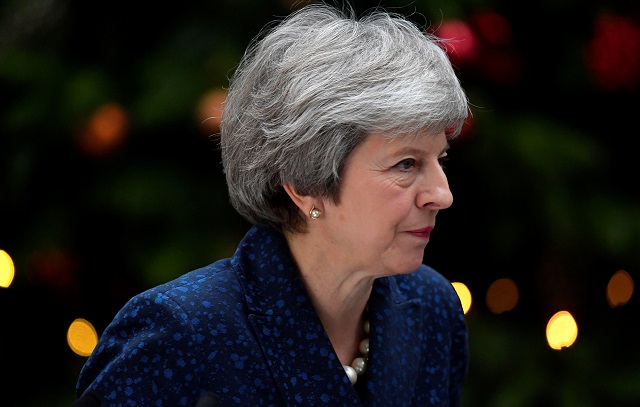 Britain's Prime Minister Theresa May addresses the media outside 10 Downing Street after it was announced that the Conservative Party will hold a vote of no confidence in her leadership, in London, Britain, December 12, 2018. PHOTO:REUTERS

British lawmakers defeated Prime Minister Theresa May’s Brexit divorce deal by a crushing margin on Tuesday, triggering political upheaval that could lead to a disorderly exit from the EU or even to a reversal of the 2016 decision to leave.

Parliament voted 432-202 against her deal, the worst parliamentary defeat for a government in recent British history.

Scores of her own MPs – both Brexiteers and supporters of EU membership – joined forces to vote down the deal.

With the clock ticking down to March 29, the date set in law for Brexit, the United Kingdom is now ensnared in the deepest political crisis in half a century as it grapples with how, or even whether, to exit the European project that it joined in 1973.

May’s crushing loss, the first British parliamentary defeat of a treaty since 1864, marks the collapse of her two-year strategy of forging an amicable divorce with close ties to the EU after the March 29 exit.

After repeatedly refusing to resign or to countenance another referendum, May will make a statement shortly. Her options include setting course for a no-deal exit, brinkmanship to try to secure concessions from the EU, a delay to Brexit, resignation, an election or a referendum.

One in three UN employees have been sexually harassed: survey